A butcher passes a model of a cow featuring cuts of beef during the opening day of the International Agriculture Fair (Salon de l'Agriculture) at the Porte de Versailles exhibition center in Paris, on February 24, 2018.
GERARD JULIEN—AFP/Getty Images

An organization representing French butchers has called for the government to stop violence from what it calls “militant” vegans.

Jean-François Guihard, the president of the French Confederation of Butchery (Confederation Francaise de la Boucherie Charcuterie-Traiteur), wrote a letter to Interior Minister Gerard Collomb, which was published on the confederation’s website and Facebook page on Monday. According to France 24, Guihard sent the letter last week.

The letter expresses the concerns of 18,000 butchers in France regarding what it calls the “authoritarianism” of vegans seeking to impose their meat-free beliefs on others through “propaganda (the famous fake news).”

As well as complaining about the apparent media attention given to vegans, Guihard’s letter says that “militants” have “called for violence against local shops” and refers to a vegan who “rejoiced about the murder of our colleague in the Trèbes terror attack.” In March, vegan cheesemaker Myriam-Serge Jouglet was convicted of condoning terrorism after posting on Facebook that butcher Christian Medves, killed in the supermarket siege that month, was an “assassin” and his death was “justice.”

The butchers’ confederation letter also referenced vandalism against a butcher’s, a fishmonger’s and a rotisserie, likely referring to reports in Lille of smashed windows and graffiti on a butcher’s shop and a restaurant. The graffiti in both instances called for a stop to “speciesism,” the idea that different rights and values are assigned on the basis of species.

The letter concluded by claiming that “the attacks our butchers and delicatessens have suffered are essentially terrorism” and called on the interior minister and the government for its support to “stop the physical, verbal and moral violence.” 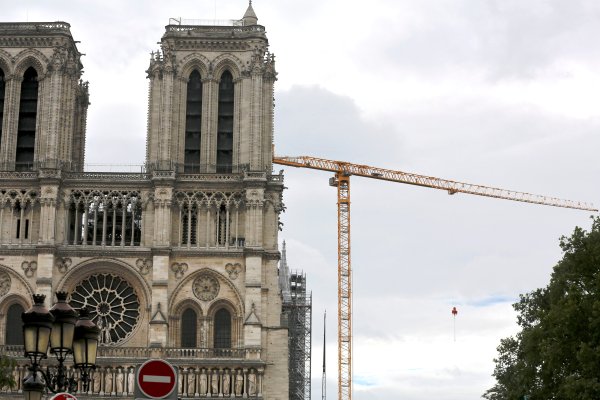 Notre Dame Cathedral To Be Rebuilt As Before
EDIT POST