President Donald Trump threatened Harley-Davidson with a “big tax” on Tuesday after the company revealed it was moving production overseas to avoid retaliatory tariffs from the European Union.

In a slew of tweets Tuesday morning, the President also claimed the move could “be the beginning of the end” for the famous motorcycle maker and accused the company of using the tariffs “as an excuse” to move their production operations to Thailand. “Their employees and customers are already very angry at them,” he said.

“Companies are now coming back to America,” Trump tweeted. “Harley must know that they won’t be able to sell back into U.S.without paying a big tax!”

In a regulatory filing Monday, Harley-Davidson said the retaliatory tariffs from the European Union, imposed in response to Trump’s steel and aluminum tariffs, would increase costs by “$2,200 per average motorcycle exported from the U.S. to the E.U.,” totaling to as much as $100 million a year in costs. Harley-Davidson said it did not plan on raising retail or wholesale prices to cover the added costs.

The company said increasing production internationally “is not the company’s preference, but represents the only sustainable option to make its motorcycles accessible to customers in the EU and maintain a viable business in Europe.” Shifting more production abroad will take the company between 9 to 18 months, Harley-Davidson said. The company did not detail how many jobs would be lost or shifted to Thailand as a result. Harley-Davidson sold nearly 40,000 motorcycles in Europe in 2017, according to its annual report. The company did notimmediately respond to a request for comment.

The E.U. announced plans to place retaliatory tariffs on US. products like motorcycles, cranberry juice, peanut butter and whiskey in response to Trump’s hefty tariffs on steel and aluminum imports. The president targeted Harley-Davidson on Monday as “the first to wave the White Flag” as a result of these retaliatory measures. A representative from the White House did not respond immediately to a request for comment.

Trump imposed a 25 percent tariff and 10 percent tariff on steel and aluminum, respectively, in the interest of national security, he has said, and in an effort to promote domestic manufacturing. The E.U., Mexico and Canada were initially excluded from the tariffs when Trump announced them in March, but that expired on June 1. 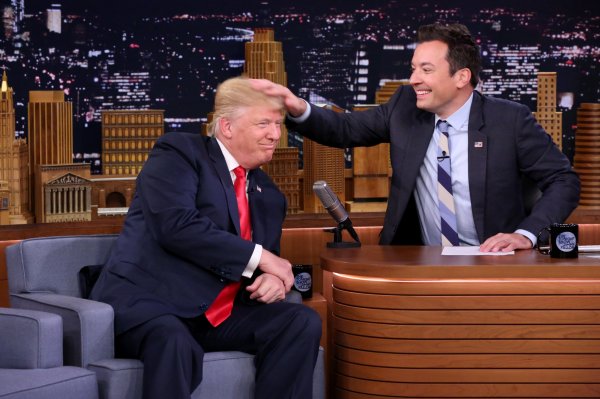 'Shouldn't He Have More Important Things to Do?' How Jimmy Fallon Responded to President Trump's Twitter Insult
Next Up: Editor's Pick