Saudi Arabia’s lift of the ban on women driving on June 24 marked a long-awaited moment for Saudi Arabia’s activists. But not everyone was celebrating. That day, several leading figures of the Saudi women’s-rights movement were still detained on unspecified charges and unable to mark the achievement of a goal they had been working toward for years.

Protests against the ban had begun in 1990. Many of these activists had campaigned for years against the world’s last remaining ban of its kind, as well as against the country’s male guardianship system. Loujain al-Hathloul, Aziza al-Yousef and Eman al-Nafjan are three of at least 11 people linked to the Saudi women’s-rights movement who were detained as part of a broader crackdown in May. According to human rights observers, the women were targeted in a “smear campaign” on social media and state-linked media outlets, accusing them of being traitors to the state and collaborating with “foreign entities.” Local media reports say that nine people currently detained are being referred to the country’s Specialized Criminal Court and if convicted, could be facing up to 20 years in prison. Other activists in the country have been placed under travel restrictions and warned not to comment on the lifting of the driving ban.

Crown Prince Mohammed Bin Salman has openly spoken about his desire to reform Saudi Arabia’s economy and society, with the lifting of the driving ban pitched as part of that effort to modernize the country’s conservative culture. However, the renewed crackdown on activists marks a “worrying contradiction,” according to human rights observers.

“On the one hand the crown prince is promoting himself as a reformer and as a progressive, and on the other hand he has intensified this crackdown on dissent, on free speech, on allowing any form of free thought in the kingdom,” Samah Hadid, Middle East Director of campaigns for Amnesty International, tells TIME. “You can’t rebrand yourself as a reformer if you are arresting peaceful activists simply because they are calling for reforms.”

Here, more on three of the most prominent women’s-rights defenders detained in the crackdown.

28-year-old Loujain al-Hathloul is one of the most visible campaigners advocating for Saudi women’s right to drive. She was previously arrested and detained in 2014 and 2017 for defying the driving ban and attempting to drive between Saudi Arabia and the neighboring United Arab Emirates.

Al-Hathloul gained international attention when she used social media to document her 2014 arrest. In a short video posted to YouTube, which has since been viewed over a million times, she filmed herself driving and attempting to cross the border from the UAE into Saudi. She also live-tweeted the experience of her arrest and start of her detention.

In 2015, al-Hathloul stood in Saudi Arabia’s landmark first elections that permitted women to run for office as well as vote. However, she was one of two activists whose names were later disqualified from the ballot. “We have to all realize that criticizing some phenomena in our home country does not equate to hating it, wishing evil upon it nor is it an attempt to shake its balance, it’s the total opposite,” she wrote in a 2016 article in response to social media backlash to her activism, indicating her hope for a better future for Saudi Arabia.

A retired computer science professor and mother of five, 60-year-old Aziza al-Yousef has been at the forefront of campaigning against Saudi Arabia’s restrictive male guardianship laws. Under this system, women are required to obtain permission from their male guardian to carry basic tasks and make life decisions, such as traveling, enrolling in higher education and obtaining access to essential medical services.

“Women should be treated as a full citizen. This is not only a women’s issue, this is also putting pressure on normal men,” al-Yousef told the Guardian upon the explosion of a 2016 social media campaign and online petition against the system that garnered over 14,000 signatures. Al-Yousef attempted to personally deliver the petition herself to King Salman and although her efforts were rebuffed, human rights observers noted that the overwhelming response from Saudi women on social media to the campaign was “incredible and unprecedented.”

Al-Yousef was also detained in 2013 for driving a car in Riyadh with Eman al-Nafjan as her passenger. “We are sick and tired of waiting to be given our rights,” al-Yousef told CNN at the time of her arrest. “It’s about time to take our rights.”

Tweeting and blogging as @saudiwoman, Eman al-Nafjan’s account and popular website has been silent since arrests began on May 15. “She was the contact point as someone who was approachable,” Hala Al Dosari, a Saudi activist and academic at Harvard’s Radcliffe Institute, tells TIME.

Al-Nafjan’s bilingual blogs on everyday life and culture in Saudi Arabia told news “straight from the source,” as she put it. Her self-published work explored social and political issues ranging from ‘Upbeat feminist news from Saudi’ in 2008, to her thoughts on the 2016 U.S. presidential election.

It was this voice and defense of human rights, relayed in both English and Arabic, that Amnesty International said made her a target for harassment, interrogation, and last month, detention. “The government is trying to control the narrative and wipe out any further activism, so they remove the person who is most approachable, especially before June 24, in the most vicious way possible,” says al-Dosari.

Al-Nafjan, 39, was also an organizer of the October 26th Women to Drive Movement in 2013 encouraging women to take up the wheel, which faced strong opposition from the Saudi Arabian government. “If there was one word to describe what it is like to be a Saudi woman, it would be the word patronizing,” she wrote in a 2013 article for Amnesty, calling on the government to stop relying on excuses and commit to lifting the driving ban. 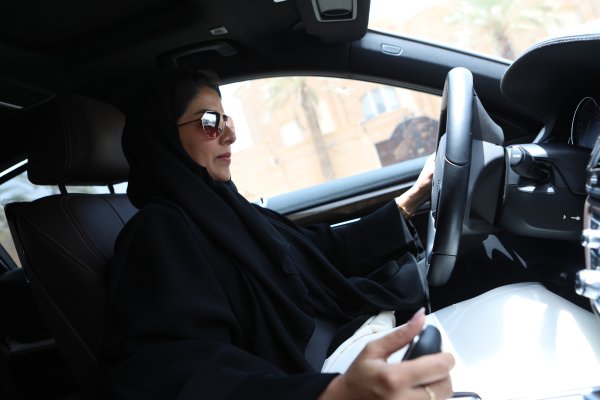 What Saudi Arabia's Latest Reforms Mean for the Kingdom
Next Up: Editor's Pick