Thai Divers Continue the Search For 12 Boys and Their Coach Trapped in a Flooded Cave. Here’s What to Know

The search for 12 boys and their soccer coach who have been missing in an extensive cave network in northern Thailand entered a sixth day, with efforts now turning to draining floodwater or finding alternative routes inside the cave.

A rescue team began drilling holes into the mountain containing the cave complex on Thursday in the hopes of drawing out some of the rising rainwater that has prevented rescue forces, lead by Thai Navy SEALS, from reaching group, the Associated Press reports.

Unable to ascertain the boys’ location after six days, police also released 20 survival packages containing food, water, medicine, and flashlights through a fissure drilled into the cave wall Friday, Reuters reports. The boxes also contained a map and a note, which requested the group mark their location and attempt to float the boxes back to rescuers.

Meanwhile, a “Plan A” team of Thai divers supported by international experts from the U.S. and U.K. continue to hope to locate the boys, aged 11 to 16, and their 25-year-old coach, Thailand’s the Nation reports.

But rescuers have encountered repeated setbacks and persistent rain, with ventures by Thai Navy SEALS into the cave have been stymied every day this week by rising, muddied floodwaters, which have cut off access to some parts of the extensive cave network and hampered divers’ ability to navigate now-underwater passages.

Thai authorities have remained resolutely optimistic that the group has found shelter on dry ground within the cave, and will be found.

“There has to be faith. Faith makes everything a success,” said Thailand’s Thailand’s junta leader Prayuth Chan-ocha, who visited families of the missing boys Friday. Prayuth urged the gathering, which has observed a vigil at the cave’s entrance, to trust in the authorities and “in our children who are strong and vigorous. Everything will go back to normal,” he promised, according to AP.

A group of 12 boys and their soccer coach are thought to have entered a cave in Thailand’s northern Chiang Rai province on Saturday afternoon, the Associated Press reports. After one of the boys did not return from soccer practice, his mother alerted the authorities, prompting the search effort. Bicycles, backpacks and soccer kit were found at the cave.

According to rescue officials, heavy rain this week has caused parts of the cave to fill with as much as 5m (16 ft.) of water, with levels at times rising by as much as 15 cm (6 in) per hour, sealing off some areas and making it difficult for Navy SEALs to negotiate the cave’s underwater passages.

Earlier this week, police found footprints and handprints inside the complex, and other hikers cut off by floodwaters have been rescued from safe, higher ground inside the cave in the past, authorities said. “We’re confident that the kids should still be in good condition,” Chiang Rai Deputy Governor Passakorn Bunyalak said Monday.

Exploring deeper parts of the cave will add more challenges to the rescue effort. Divers might need to teach the trapped boys basic scuba skills and bring them food supplies, or the boys may have to wait until the flood waters recede, Passakorn said.

The boys and their coach, members of the Moo Paa (Wild Boar) Academy football club, are believed to be trapped in the Tham Luang Nang Non cave, a 6-8 km (4-5 mi) long cavern that is comprised of large chambers connected by narrower passageways. The cave is a tourist attraction that’s located close to the Myanmar border. According to a guidebook on the region’s caves, Tham Luang Nang Non is only passable between November and June due to flooding during Thailand’s rainy season.

Family members pray at the entrance of Tham Luang cave while rescue personnel conduct operations to find the missing members of the children's football team and their coach at the cave in Khun Nam Nang Non Forest Park in Chiang Rai province on June 26, 2018.
Krit Phromsakla Na—AFP/Getty Images

What rescue efforts are underway?

Thai Navy SEALS have been repeatedly forced to pull back in recent days by swelling water. But before efforts were halted Monday, search teams found bags and shoes in a second chamber behind the cave entrance, raising hopes that the team is deeper yet in the complex.

Electricians installed a power line 1 km (.6 mi) into the cave Monday night to support the divers with electric lights, fans, and engines to pump out some of the floodwater. But persistent rains Wednesday night forced the authorities to power off the pumps, which were overcome by the water levels, raising fears of a possible electrical hazard, AP reports.

Rescuers took a different tack Thursday, drilling holes into the mountain in an attempt to release some of the water from blocked passages. The team drilled bored until 1:00 a.m. Friday morning, reaching a depth of 30 m (98 ft) into the ground, but failed to locate a wellspring, AP reports.

“We will continues to drill today, and more drill equipment is being sent so we can also explore” said Ekchawin Longpinit of the Thai Underground Water Department.

Thai teams also constructed dams Wednesday in an effort to prevent more rainwater from flowing into the cave, according to Thailand’s The Nation.

Hundreds of officials, a “Plan B” team, are also hunting for a surface rift that will allow rescuers to access deeper portions of the cave,The Nation reports. A few shafts have already been rejected, but Interior Minister Anupong Paojinda said the team is still examining an additional three locations, according to AP. If a suitable opening is identified, they will use geological equipment such as cameras to probe into the network in hopes of narrowing down the missing group’s position, Anupong said.

A team from Thai oil and gas exploration firm PTTEP also joined aboveground efforts Thursday with a fleet of drones equipped with cameras and heat-detecting devices, The Nation reports. The drone photos will be used to piece together a 3D map that rescuers hope will inform drilling operations into the cave walls. Another PTTEP team is using a sonar-equipped robot to construct a similar map of submerged parts of the cave.

“We will keep our effort up no matter how tired we are,” Chiang Rai Gov. Narongsak Osatanakorn said Friday, according to AP.

Family and supporters have gathered outside the cave, waiting for news and holding prayer sessions. Some performed a traditional ritual Tuesday morning to call for those who are missing.

“I haven’t slept and I hope that all of them can come out, all safe and sound,” said Namhom Boonpiam, whose 13-year-old son Mongkol is missing. “My son is a strong boy. I still have hope.” 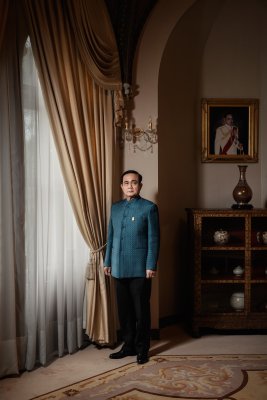 Exclusive: Thai PM Prayuth Chan-ocha on Turning to China
Next Up: Editor's Pick