When President Trump announced a ban on transgender individuals in the military Iast summer, I was furious. I immediately asked my team at InStyle to research and profile a transgender woman serving in the U.S. military for our next issue. They landed on U.S. Army company commander Jennifer Peace, who joined the military when she was 19, is a married mother of three and has participated in every war of her generation. “The idea that I could lose a job I’m passionate about because of something that has no impact on my ability to serve is really difficult to think about,” she said. “Nothing else makes sense to me. I can’t imagine not putting on a uniform.”

As I read about Peace’s journey, and saw pictures of her – on duty, and with her wife and children – I thought, damn, what a badass.

It was then that my team and I decided to launch Badass Women, a series celebrating fearless women who have consistently fought for equality. History is filled with women who have changed the world with a singular or daring act, but it’s those who keep going — with or without attention — whom I really admire and who are truly changing the game.

One badass I am incredibly attached to is Mary Lou Robinson. I was watching NBC Nightly News and up popped this lady, who looks like your favorite friend’s mom when you were a kid. (You know, the one who had a halo.) Robinson may be that too, but she’s actually the chief of the high power electromagnetics division of the Air Force Research Laboratory. She is developing missiles with microwave technology, which will be capable of disarming the electronic systems of dangerous weapons. Our team hightailed it to Robinson’s base in New Mexico to photograph her with one of her missiles — rather more exciting than a fashion shoot. As she told InStyle, “If your job is to hurt me, or the United States, then I can stop you.”

Apart from her world-saving abilities, Robinson’s straightforwardness and unshakeable confidence in her ability inspires me. At a media panel in New York that I invited Robinson to, the moderator asked, “Mary Lou, how does it feel to be James Bond?” She replied: “James Bond wishes he was me.”

In order to bring these trailblazing women together, I decided to launch regular Badass Women events. At our inaugural dinner last month, I had the pleasure of sitting near Saru Jayaraman, the co-founder of Restaurant Opportunities Centers United, which aims to improve wages and working conditions for America’s restaurant workers. She asked the crowd of Time’s Up founders and activists how many of us had ever been waitresses. Almost everyone raised their hand.

Then Jayaraman asked us how we could feed ourselves and our families working at a job where, in some states, the minimum wage is $2.70. $2.70. I couldn’t get that figure out of my head, nor could anyone else. With such meager earnings, it was painful imagining what some women must have to endure for even a $2 tip. Myself and Laura Mulleavy, one of the sisters behind the fashion brand Rodarte, decided then and there to design a T-shirt to benefit Jayaraman’s organization, which will be available this summer.

That was the point of the event, to foster change and opportunity for women. Jayaraman is one of the most compelling, decent and persuasive women you’ll ever meet. Her dedication for fairness in the hospitality industry doesn’t stoke guilt, she just wants to rally all of us to help each other.

See, that’s the thing: women have to pay attention. In this fraught political climate, we can’t take anything for granted. Those of us with a voice can’t rest on our laurels — or our tax cuts — and retreat to our bubbles. As director Ava DuVernay said at our Badass dinner, we were there to represent, “the women not in the room, who will never be in the room.”

Being a badass is speaking your mind and showing up — not just for yourself, but for the women around you and all of the women who will come after you. 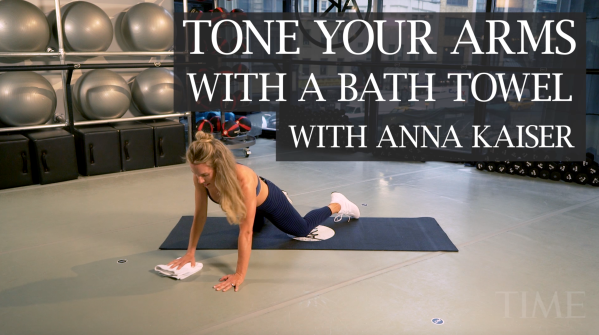 How to Seriously Tone Your Arms With Just a Bath Towel
Next Up: Editor's Pick