Sloat is a Robert Bosch senior fellow in the Center on the United States and Europe at the Brookings Institution. She was a Research Fellow at Queen's University Belfast from 2001-2005.

Buoyed by opinion polls, opponents of Turkish President Recep Tayyip Erdoğan believed they had a realistic chance of unseating him—or at least reducing his dominance in Sunday’s elections. It was not to be: Erdoğan secured the presidency in the first round and his Justice and Development Party (AKP) maintained control of parliament in coalition with the Nationalist Movement Party (MHP). These elections, which implemented constitutional changes approved in an April 2017 referendum, marked the country’s shift from a parliamentary to a presidential system.

The United States and Europe watched the election closely—given their interest in having a strong, stable partner with a democratically elected government that upholds rule of law. As a long-time NATO ally strategically located between Europe and the Middle East, Turkey remains critical to addressing shared transatlantic concerns, including countering terrorism and managing migration flows.

But it was clear before polls opened that the election was being held under unfair conditions, not least given the state of emergency in place since the July 2016 coup attempt, as well as the imprisonment of a presidential candidate on spurious terrorism charges. The preliminary report by the Organization for Security and Cooperation in Europe (OSCE) cited restrictions on freedom of assembly, association, and expression. In a press conference Monday morning, election observers said candidates lacked equal opportunities, media coverage was skewed, and changes to the electoral law were problematic.

There are ongoing debates about whether the election was “free,” amid reports of ballot stuffing and vote rigging. Yet Muharrem İnce, presidential candidate of the main opposition Republican People’s Party (CHP) who placed second with 30.6 percent of the votes, conceded fraud did not fully explain his loss: “Did they steal votes? Yes, they did. But did they steal 10 million votes? No.” Noting similarities between official data and monitoring by his party, he said the victory margin was so wide that it “cannot be explained merely by election irregularities.”

It is clear from the results that Turkey remains a deeply polarized society. Erdoğan won 52.6 percent of the presidential ballots, which broadly tracks with the 51.4 percent support for his constitutional reforms in the April 2017 referendum. He remains genuinely popular with conservative Turks sidelined during decades of secular rule, while those who benefitted from his economic policies seemingly do not blame him for the recent slowdown. Identity politics, including right-wing nationalism, remain a potent force. However, it is worth noting Erdoğan could not have won the presidency without far-right MHP voters nor can his party govern parliament without their continued support. This means policy-making will remain driven by nationalist considerations, with any prospect of resuming the Kurdish peace process a likely casualty. Given the higher threshold required for constitutional change, Erdoğan would need the backing of additional parties to enact broader reforms.

The most unfortunate result of this election may be the marginalization of nearly half of Turkey’s voters, who oppose Erdoğan’s political agenda. Turkish citizens still believe in the importance of the democratic process, with a turnout of 86 percent (compared to 55 percent in the 2016 US election). Opposition parties, who were long accused of being weak and unorganized, ran credible and competitive campaigns that energized millions of voters. The use of political alliances to help parties cross Turkey’s notably high 10 percent threshold required to enter parliament means the legislature has a diverse range of views, albeit with weakened powers under the new system. The opposition was defeated at the ballot box—either legitimately or unfairly—and must find a way to preserve the pre-election spirit of resistance.

Western leaders also confront difficult choices in their relationships with Turkey. The biggest question is the future of rule of law and human rights, with reasonable fears of an emboldened president facing fewer constraints under new constitutional arrangements. NATO Secretary General Jens Stoltenberg congratulated Erdoğan, yet noted the Alliance was based on the “core values” of democracy, rule of law, and individual liberty. European Union High Representative Federica Mogherini and Commissioner Johannes Hahn refrained from congratulations, but praised “the strong attachment of the Turkish people to democratic processes and the pursuit of their civil liberties.” The E.U. Council will discuss relations with Turkey later this week, balancing the need for collective action on migration flows with concern about democratic backsliding. The U.S. maintains interests in resolving the Syrian conflict, preventing the purchase of a Russian missile defense system, and seeing its citizens and embassy employees released from Turkish jails.

As Western allies ponder their approaches, it is worth considering that other countries are also facing internal struggles—including the United States. There are obvious limits to such comparisons, as here the press remains free, courts are independent, and Congress retains authority. But both Turkey and America have societies deeply polarized along identity lines; leaders who challenge democratic institutions and do not always respect international norms or historic friendships; and Western partners who struggle to develop appropriate policy responses for challenging allies.

It is important to remember countries are bigger than their leaders, while the voices of opposition parties and citizens who advocate alternative approaches are worth hearing. Western countries will undoubtedly continue to cooperate with Turkey on areas of shared interest, express concern about differences, and encourage adherence to rule of law. Yet they must also find ways to nurture Turkey’s democratic spirit amid the implementation of constitutional reforms that consolidate presidential power and limit checks and balances. 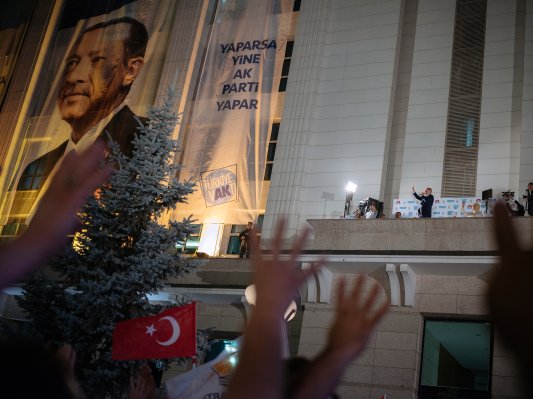 What Erdogan’s Election Victory Means For Turkey’s Future
Next Up: Editor's Pick