By W.J. Hennigan and Philip Elliott

The Defense Department has been directed to build short-term detention camps on two U.S. military bases in Texas, expanding the Pentagon’s role in the Trump Administration’s “zero tolerance” policy toward undocumented immigrants.

Construction crews will begin building temporary housing at Fort Bliss and Goodfellow Air Force Base for the growing number of migrants swept into the federal system due to the Administration’s policy of referring all border crossers for prosecution, according to U.S. officials.

Fort Bliss, located near El Paso on the Rio Grande river across the U.S.-Mexico border, is an Army base comprised of more than 1 million acres across New Mexico and Texas. A Trump Administration official says Fort Bliss is being prepared to house families whose adults face criminal charges.

Goodfellow Air Force Base is located further north near San Angelo in central Texas. The same official says children who arrive on the U.S. border without a parent will stay at Goodfellow.

A Pentagon memo to members of Congress last week said the facilities could be available as early as July. Aides to lawmakers, including those who are visiting border towns on Monday, said they were still trying to learn more about the policy.

Defense Secretary James Mattis said Monday that “details are still being worked out” on constructing the facilities and housing the undocumented immigrants along the southern U.S. border. However, he didn’t identify which bases would house the migrants until later in the day.

“We are in a logistics support response mode,” Mattis told reporters traveling with him during a week-long swing through eastern Asia. He compared the mission to the military’s role in the 1970s after the Vietnam War when they housed thousands of refugees rescued at sea.

“This is something that we can do again, whether it be refugee boat people from Vietnam, people that have been knocked out of their homes by a hurricane, absolutely it’s appropriate to provide logistical support however it’s needed,” Mattis said.

The difference, of course, is that the Vietnamese were welcomed as refugees and not awaiting prosecution in the federal court system. The Trump Administration’s policy refers all illegal border crossings for federal criminal prosecution — and previously led to children being separated as their parents were sent to jail before President Donald Trump’s about-face last week.

More than 2,300 children were separated from the adults they crossed the border with, provoking outrage around the world and producing a public relations nightmare for the administration. As anger over the policy reached its peak, Trump signed an Executive Order on June 20 to enable these families to stay together. In a fact sheet released Saturday evening, the Department of Homeland Security said 522 children who had been separated from their families were since reunited, but provided no timeline for when the rest of the reunions would happen.

Trump said on Twitter Sunday that immigrants entering the country illegally should be removed from the country “immediately” without due process of being granted a court hearing. He repeated that claim on Monday as part of a broader Twitter tirade.

Meanwhile, it remains unclear whether the U.S. military will be detaining children, adults, or both. American troops’ role in detaining the migrants is equally as opaque. The military has had this role before, though. In 2014, the Obama Administration placed around 7,700 migrant children on bases in Texas, California and Oklahoma. The temporary shelters were shuttered after four months.

The U.S. Department of Health and Human Services completed assessments last week at three military bases in Texas and one in Arkansas. The agency, which is responsible for caring for the children until they can be given to an adult relative, stated it already holds more than 10,000 children in a network of 100 shelters in 14 states.

Seeing the rising tide of incoming migrants, the military has carried out its own assessments in potentially taking on more responsibility in having to house detainees awaiting civilian criminal proceedings. TIME obtained an internal Navy document last week that showed preparations to construct sprawling detention centers for tens of thousands of immigrants on remote bases in California, Alabama and Arizona if called upon to do so.

Write to W.J. Hennigan at william.hennigan@time.com and Philip Elliott at philip.elliott@time.com. 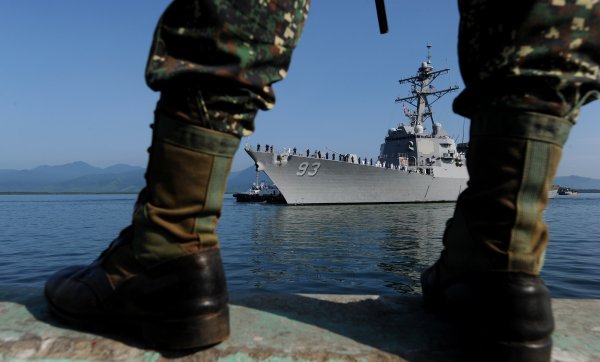 U.S. Military Could 'Take Down' China's Islands, General Says
Next Up: Editor's Pick