“The Red Hen Restaurant should focus more on cleaning its filthy canopies, doors and windows (badly needs a paint job) rather than refusing to serve a fine person like Sarah Huckabee Sanders,” the President tweeted. “I always had a rule, if a restaurant is dirty on the outside, it is dirty on the inside!”

White House Press Secretary Sarah Huckabee Sanders said over the weekend that the Red Hen restaurant in Lexington, Virginia, denied her service because she worked for the President.

“Her actions say far more about her than me,” Sanders tweeted, in reference to the restaurant’s owner. “I always do my best to treat people, including those I disagree with, respectfully and will continue to do so.”

Stephanie Wilkinson, the owner of the Red Hen restaurant, told The Washington Post that her staff “felt there are moments in time when people need to live their convictions.” “This appeared to be one,” she said.

The President’s use of his massive social media platform to target the restaurant further puts the small business in the national spotlight and at the center of a debate of what, when and how private businesses can refuse to serve a customer.

Additionally, Trump’s targeted comments on the décor and cleanliness of the restaurant prompted critics of the President to point to his own business’s shortfalls in the past. Earlier this year, an inspection at a restaurant at Trump’s Mar-a-Lago resort resulted in numerous violations, including improper food storage. The club also received violations for a lack of smoke detectors and broken staircases.

Located about a six-hour drive from Washington, D.C., the Red Hen describes itself as “Lexington’s first farm-to-table restaurant.” The small restaurant appeared to receive an onslaught of Yelp reviews as a result of the incident (and before the President tweeted about it specifically), inciting supporters of the Trump administration to flood the reviews section with critical comments and images of Trump. (One Baton Rouge, Louisiana-based reviewer took it upon himself to write a poem critiquing the restaurant, and how it could “alienate half of their crowd.”)

Wilkinson, told the Post that she asked Sanders to leave at the request of her staff, some of whom said they felt uncomfortable by her presence and her defense of the Trump’s administration policies. Sanders then agreed to leave, Wilkinson told the Post.

“I have a business, and I want the business to thrive,” Wilkinson told the Post. “This feels like the moment in our democracy when people have to make uncomfortable actions and decisions to uphold their morals.” 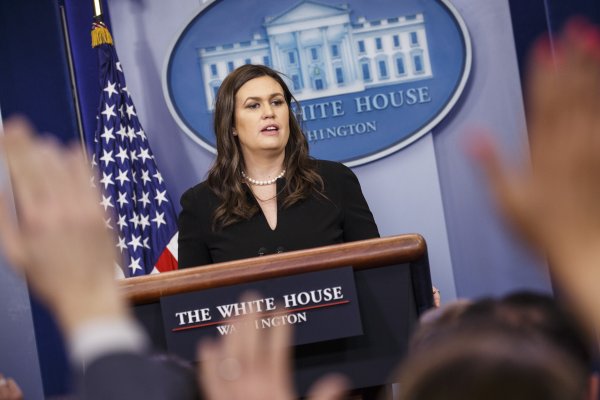 Restaurant Owner on Why She Asked Sarah Huckabee Sanders to Leave
Next Up: Editor's Pick