Rep. Maxine Waters (D-Calif.) is calling on her supporters to confront Trump administration officials and staffers in public amid widespread backlash to the President’s zero-tolerance policy on illegal immigration.

“Let’s make sure we show up wherever we have to show up,” Waters told a crowd in California over the weekend. “If you see anybody from that cabinet in a restaurant, in a department store, at a gasoline station, you get out and you create a crowd, and you push back on them, and you tell them they’re not welcome anymore, anywhere.”

Waters’ call to action comes after two Trump administration officials recently faced backlash in public and, in one case, was denied service at a restaurant.

Last week, protesters confronted Homeland Security Secretary Kirstjen Nielsen while she ate at a Mexican restaurant in Washington, D.C., after she defended the administration’s policy of separating migrant children from their parents. A spokesperson for the Department of Homeland Security said Nielsen was having a work dinner at the restaurant.

Over the weekend, White House Press Secretary Sarah Huckabee Sanders tweeted that she was denied service at a Lexington, Virginia restaurant called Red Hen because she worked for President Donald Trump. “Her actions say far more about her than me,” Sanders wrote in a tweet, referring to the restaurant’s owner.

The owner of the restaurant, Stephanie Wilkinson, later told The Washington Post that “there are moments in time when people need to live their convictions. This appeared to be one.”

Waters’ comments come amid ongoing fallout from Trump administration’s zero-tolerance policy, which, before the President signed an executive order curtailing it last week, resulted in the separation of more than 2,300 migrant children from their parents at the U.S.-Mexico border. Despite Trump’s order, government agencies and foster care organizations tasked with caring for these separated children received little to no guidance on what to do with them. The Department of Homeland Security said on Saturday that 522 of the separated children had been reunited with their families. On Sunday, Trump tweeted that immigrants who enter the country illegally must be deported “immediately, with no Judges or Court Cases.”

“Mr. President: We will see you everyday, every hour of the day, wherever you are, to let you know you cannot get away with this,” Waters said over the weekend.

“History is not going to be kind to this administration,” she said. “But we want history to report that we stood up. That we pushed back. That we fought. That we did not consider ourselves victims to this president.” 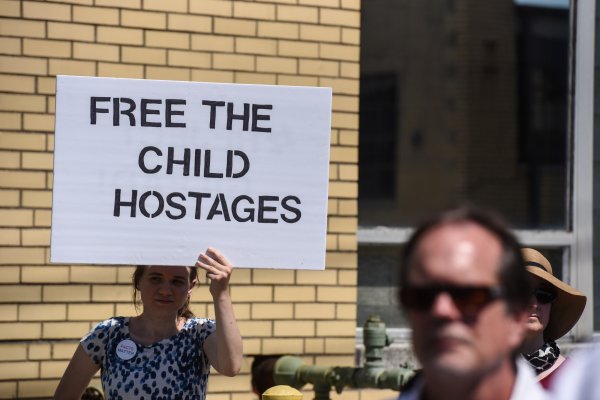 Congress Grasps for Border Crisis Fix
Next Up: Editor's Pick