Amnesty International has identified 13 Myanmar military and police officials as having a key role in recent violent crimes against the country’s Rohingya Muslim minority, reiterating calls for the U.N. Security Council to refer the situation to the International Criminal Court.

A landmark report released Wednesday says the organization possesses evidence that nine out of 11 Crimes Against Humanity listed in the Rome Statute, including murder, rape and torture, were committed against the minority since late last year in a campaign of violence that has been labeled ethnic cleansing by the U.N. and Washington. Human rights groups say there is evidence of genocide.

The 190-page report, based on more than 400 interviews conducted over nine months during research missions to both Myanmar and Bangladesh, describes witness and other accounts of unlawful killings, gang-rape, deprivation of vital resources and the burning of Rohingya villages in a “targeted and deliberate manner.”

More than 700,000 Rohingya have since fled across the border into Bangladesh, representing roughly 80% of the group’s total estimated population in northern Rakhine state. About 200,000 Rohingya were already living in refugee settlements in the Bangladeshi district of Cox’s Bazar, having fled earlier violence, and the group has a total estimated population of about 1.1 million.

Amnesty further alleges that the military abuses occurred both before and after the August attacks by ARSA, which had also launched earlier attacks in October 2016. The report identifies two combat divisions known to have been involved in prior abuses elsewhere in the country — Light Infantry Divisions 33 and 99 — that were deployed to Rakhine state weeks before the August violence began. In a separate report Tuesday, Reuters detailed the specific role of Myanmar’s 33rd and 99th LIDs in carrying out the offensive.

“The explosion of violence – including murder, rape, torture, burning and forced starvation – perpetrated by Myanmar’s security forces in villages across northern Rakhine state was not the action of rogue soldiers or units,” said Matthew Wells, Senior Crisis Adviser at Amnesty International. “There is a mountain of evidence that this was part of a highly orchestrated, systematic attack on the Rohingya population.”

Moreover, Amnesty’s report suggests that senior military officials would have been involved in the deployment of troops and equipment linked to serious crimes or subsequent attempts to cover them up, and that they “knew or should have known” the location and activities of ground units on specific days. Amnesty said the country’s Senior Command, the office of Commander-in-Chief Sen-Gen Min Aung Hlaing, “appears to have been actively engaged in overseeing the operations.”

Since the crisis began, the government of Myanmar, led by Nobel laureate Aung San Suu Kyi, has denied atrocities and blocked almost all access to affected parts of Rakhine state on security grounds, allowing only limited visits by diplomats, humanitarian and development actors and journalists on tightly controlled trips. To date, seven soldiers are known to have been investigated and possibly imprisoned for their role in the killing of 10 Rohingya men in one village, but Amnesty says all other military-led inquiries have been “whitewashes.”

Wednesday’s report represents a major step toward seeking accountability for the violence and consequent humanitarian crisis, and includes recommendations to the U.N., the Association of Southeast Asian Nations, the international community, the Myanmar authorities, the leadership of ARSA, the government of Bangladesh and humanitarian actors toward ensuring peace, justice and sustainable livelihoods for those affected.

On Monday, the E.U. and Canada announced sanctions against seven senior Myanmar military officials accused of involvement in the campaign against the Rohingya, including Maj-Gen Maung Maung Soe, who oversaw the operations as head of the Western Command at the time. Maung Maung Soe was later transferred to another command and was dismissed Monday due to what the military called his underperformance during the crisis in Rakhine, according to Reuters. He is also subject to U.S. sanctions due to his role in the conflict.

Earlier this month, Myanmar signed an agreement with U.N. agencies that could lead to the eventual repatriation of Rohingya refugees. The governments of Myanmar and Bangladesh agreed in November to work toward the same goal, though human rights groups remain doubtful that the safe and sustainable return of some 700,000 Rohingya can be guaranteed. 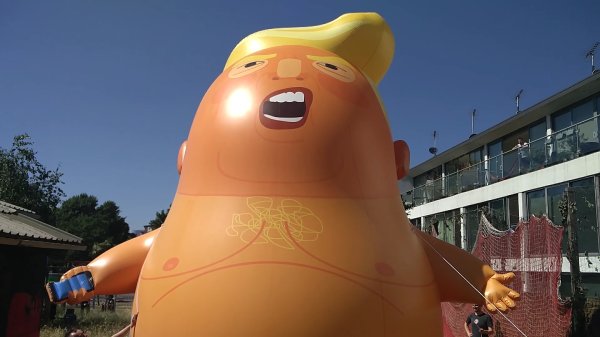 Here's a Giant 'Baby Trump' Balloon Made by British Protestors for the President's Visit
Next Up: Editor's Pick