Women across Saudi Arabia greeted the lifting on Sunday of a longstanding ban against women drivers in a variety of ways. Hundreds who already have their license took to the streets for their inaugural drives. One showered every intersection she passed with rose petals. Another took her dad for a ride to make up for all the times he had taken her somewhere. Ohoud Al Arifi logged into her Uber drivers app, and waited for a fare.

The lifting of the driving ban quashes one of the most enduring symbols of sexism and inequality in Saudi Arabia, and has widely been hailed as a major step forward for women’s rights in the country. It also provides immense opportunities for employment — allowing Saudi Arabia to move toward a goal set by 32-year-old Crown Prince Mohammad bin Salman to raise women’s participation in the workforce to 30% by 2030.

Women will no longer have to depend on husbands or fathers to get to work, or spend a significant chunk of their salaries on a full-time driver. And some — like the Uber driver Al Arifi — are themselves becoming professional drivers.

Both the ride-hailing app and its main competitor in the Middle East, Careem, have embraced the opportunities opening up with the lifting of the ban. Uber has just opened a dedicated women’s “Greenlight Hub” in Riyadh to register, train and support new drivers, while Careem has already trained 2000 women in anticipation of them being able to get licenses. Saudi women who have a driver’s license from abroad have been able to convert them to Saudi licenses for the past month, though the pace has been slow. New drivers must take a 30-hour driver’s ed course before they can take their driving tests.

Al Arifi, who earned her license in California, was the first woman to register as an Uber driver in Saudi Arabia, though it might have helped that she is the company’s marketing manager for Saudi Arabia. But when she turned on her Uber app just after midnight, she was doing it purely as a driver testing out her new opportunities. Her first fare was a woman. “She was very excited,” says Al Arifi, 25. “She couldn’t believe it, especially since it was just hours after the ban ended.” The woman sat in the front seat, Al Arifi says, and asked how to sign up to drive for Uber.

In September, Uber will launch a pilot program that will allow its female drivers the choice of selecting only female passengers, after 74% of prospective drivers said they would only be interested in driving other women because of cultural preferences—Saudi Arabia has practiced gender segregation for so long, many women and their families still prefer it, even in the workplace. “It seems that Saudi women do not mind having male drivers, but women drivers mind who sits with them in the car,” says Al Arifi, who helped conduct the research.

Careem, a Dubai-based transportation network company whose name is a play on the Arabic word for generosity, has also rolled out a marketing campaign to attract new drivers. Less than an hour after the Crown Prince announced on Sept. 26 last year that women would be allowed to drive, the company flooded its Saudi social media accounts with a note of congratulations to all the country’s women.

The message said that after creating 100,000 jobs for Saudi men, Careem was now looking forward to creating 100,000 more for Saudi women. They followed up that night with a hastily produced video of a woman reciting the Careem pledge of service and announced that they were accepting applications. Two thousand women signed up, the company says.

For Careem co-founder and “chief people officer” Abdulla Elyas, bringing on Saudi women drivers isn’t just a business opportunity, it’s a commitment to changing lives. “When you give women an income opportunity, it’s as transformational as you can get.” It’s also a way to fundamentally change society, and the industry. “It’s very rare to see a woman driving a taxi, and there is no reason for that. The industry needs to wake up,” he says.

Elyas says he wants to extend diversity in Careem’s operations across 13 countries in the Middle East, North Africa, and South Asia. The company has committed to bring 20,000 women drivers, or ‘captainahs’—a feminization of the Arabic word for Captain, which is what Careem drivers are called—to roads across the region by 2020.

One of the first Saudi women to become a captainah is Ammal Farahat, a 45-year-old mother of two. The early Careem advertisements brought back a memory of watching an old Syrian film about a female taxi driver, she says. “Everything she went through [in the movie] showed how she was just a strong woman, and I just remembered, that is what I wanted to be.”

Like Uber, Careem doesn’t allow you to choose a specific driver, so Farahat instead offers to take me on a ride around Riyadh. From the passenger seat, Riyadh’s roads are typically chaotic. A horn honks impatiently behind Farahat as she tries to fix a location on Google Maps, while a truck comes barreling out of a side street. No one seems to notice there is a woman at the wheel.

Dressed in a cream abaya and matching headscarf, Farahat confesses that after so many years being denied the right to drive in her home country, her brain is having a hard time catching up with the new Saudi Arabia. “I want to wave at every car passing by, and say, ‘hey look at me,’ but then at the same time I’m like, ok, don’t make eye contact, we don’t want any attention, we don’t want the police to look at us.” She laughs nervously.

Although the Crown Prince has made lifting the driving ban his signature act, Saudi women are also acutely aware that several of the women who most assiduously campaigned for the right to drive over the past several years were detained on unspecified charges a month before the ban was lifted. Other activists have been told not to comment on the lifting of the ban, and some have had their travel privileges revoked. The mixed messages have left many women insecure about the durability of the change, or even whether or not they should talk about it.

But despite her fears, Farahat says, the reception has been great. Al Arifi, from Uber, says a man saluted her as she commuted to work. When she picked up her male, out-of-town colleague at the Four Seasons, the valet was so tickled to see her that he gave her parking for free. Then the reception offered her a box of chocolates.

Farahat, who also earned her driving license in California, is eager to see what the reaction of her male passengers will be. Careem prides itself on its personal service, and captainahs, just like captains, are expected to open doors and help with suitcases. “I think that may be where men might have some issues,” she laughs. “They might feel embarrassed letting a woman help them out with their luggage.”

She already has a job as a marketing consultant but decided to join Careem, in part, because the visibility would be a platform for societal change. “I wanted to be a role model, to show the rest of Saudi Arabia that there is nothing a Saudi woman can’t do.”

So far, Careem, like Uber, only has a dozen or so women ready to hit the road; the rest are still waiting to get their licenses. But considering that less than a day ago, there were no women at all behind the steering wheel, it’s a green light for change. 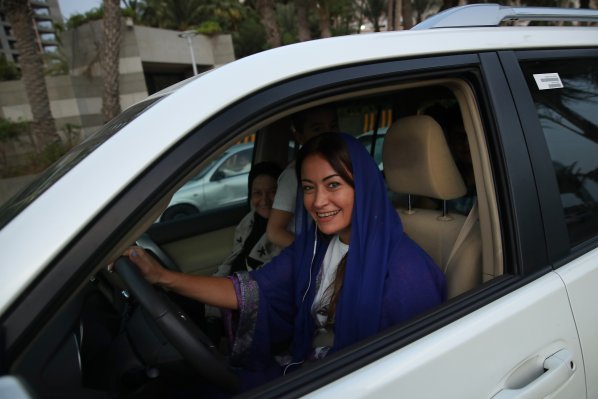 Join TIME's Aryn Baker for a Reddit AMA on Saudi Arabia
Next Up: Editor's Pick