The U.S. Supreme Court in Washington, D.C. on April 19, 2018.
Robert Alexander—Getty Images
By Olivia B. Waxman

Even as the #MeToo and #TimesUp movements continue to shape the national and global conversation about workplace sexual harassment, those on the receiving end of such harassment often still find it difficult to come forward — let alone to file a lawsuit.

One major reason why legal remedies for workplace harassment are so hard to come by dates back to 20 years ago this Tuesday, on June 26, 1998, when the Supreme Court ruled on a pair of cases that would change the way U.S. law sees that topic: Faragher v. City of Boca Raton and Burlington Industries v. Ellerth.

These two cases arrived before the Supreme Court at a moment when this field of law was rapidly evolving. After all, the most high-profile sexual harassment lawsuit of that year involved President Bill Clinton himself. Paula Jones claimed he exposed himself to her in an Arkansas hotel room in May of 1991, causing her to suffer emotional damage, and her lawsuit progressed even as an independent counsel was investigating the affair between Clinton and White House intern Monica Lewinsky. (A judge would dismiss Jones’ suit because of a lack of evidence; the two sides eventually settled.) On top of that, the number of workplace sexual harassment cases skyrocketed during that decade, jump-started by news attention to Anita Hill’s testimony at Clarence Thomas’ Supreme Court confirmation hearings, alleging that he had sexually harassed her.

Which brings us to Faragher and Burlington Industries. At issue in both cases were questions about how liable companies were for their employees harassing other employees.

In Faragher, Beth Ann Faragher said that while working as a municipal lifeguard in a town north of Miami in the late 1980s, male supervisors groped her and other female lifeguards, pantomimed oral sex, invited women to shower with them and entered their locker room without knocking. Though a lower-court judge had ruled that they had been harassed, that earlier ruling also held that the city couldn’t be held responsible for the harassment, as City Hall didn’t know what was happening.

In Burlington Industries, Kimberly Ellerth claimed that a vice president at her company commented on her physical appearance and told her that he could make her job “very hard or very easy” at the company, which Ellerth understood to mean that her success at work was contingent on sleeping with him. Though she ended up getting promoted without sleeping with him, a lower court held that what she experienced was quid pro quo harassment anyway, even if the retribution never actually materialized. (Paula Jones’ lawyers cited the earlier Burlington Industries ruling prominently, TIME noted back then.) The case facing the Supreme Court was the result of the company’s appeal on that idea.

Part of the reason these workplace sexual harassment cases at this time were so thorny was that many people, including experts, disagreed on the definitions of terms such as “quid pro quo harassment” and “hostile work environment.” As TIME reported in the run-up to Jones’ case, the laws on the subject were anything but clear:

So, in its June 26, 1998, rulings, the Supreme Court did attempt to clarify things. It outlined a standard of liability, asserting that, as the Equal Employment Opportunity Commission (EEOC) sums it up, “an employer is responsible for the acts of its supervisors” and “should be encouraged to prevent harassment.” In the Supreme Court’s words, the employer may not be liable if it can make the case that it “exercised reasonable care to prevent and correct promptly any sexually harassing behavior” and that “the plaintiff employee unreasonably failed to take advantage of any preventive or corrective opportunities provided by the employer or to avoid harm otherwise.”

In Faragher, the Supreme Court ruled that the city could be held liable because its officials “made no attempt” to monitor supervisors’ behavior and failed to circulate a policy against sexual harassment to employees. In Burlington Industries, the Supreme Court agreed that Ellerth should get a trial, upholding the United States Court of Appeals for the Seventh Circuit’s ruling.

As The Washington Post summed up the pair of decisions at the time, “The Supreme Court lowered the bar for workers [to make their cases] and said an employer is responsible for supervisors’ misconduct in situations such as Faragher’s that constitute what is known as a ‘hostile work environment.'”

But, though the cases might have been thought to help victims move ahead, the decisions also contributed to a key reason why workplace sexual harassment lawsuits are still hard to file today.

As employment discrimination law scholars wrote in an “Open Statement on Sexual Harassment” that appears in the June 2018 issue of Stanford Law Review, other forms of discrimination by a supervisor can leave an employer liable regardless of whether higher-ups knew what was going on or not, but sexual harassment or hostile-work-environment harassment is different. In hostile-work environment cases that don’t end with the victim being fired or demoted, the scholars say that, as a result of the Faragher and Burlington Industries decisions, victims have had to first go through their employer’s internal complaint process.

The internal complaint process, however, “deters many victims of harassment from ever reporting to the U.S. Equal Employment Opportunity Commission (EEOC) and suing, because they fear retaliation if they have to complain in-house,” Vicki Schultz, professor at Yale Law School and one of the authors of that statement, told TIME in an email. “The Faragher and Burlington Industries decisions are best understood against the backdrop of a trend toward ‘privatizing’ discrimination claims. In this era, the Supreme Court began upholding and/or favoring rules that forced employment discrimination victims into private fora other than courts.”

Today, experts call attention to the fact that those who suffer harassment still do not have equal access to the legal system.

As Schultz wrote for the Stanford Law Review, “While all complainants must show that the alleged discrimination was based on sex, only hostile work environment harassment victims must prove that the conduct was sufficiently ‘severe or pervasive’ that a reasonable person would find that it created an intimidating, hostile, or abusive work environment. The courts have set an unduly high bar for meeting this standard that prevents many victims from having their day in court, let alone winning… So long as harassment makes it more difficult for people to do their work because of their sex or gender, it should be prohibited just like all other forms of discrimination.” 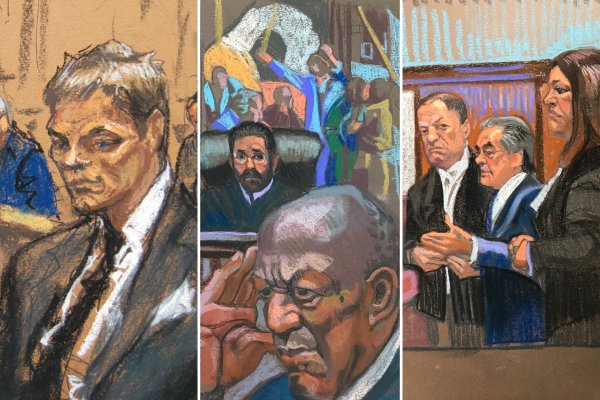 What It’s Like to Be a Courtroom Sketch Artist, According to Those Who Drew Tom Brady, Harvey Weinstein and Bill Cosby
Next Up: Editor's Pick