'They Are Coming With Little to Nothing.' How New York City Doctors Are Treating Migrant Children

As migrant children arrive at New York City hospitals without their parents or medical records, area doctors say they are doing whatever they can to ease their transition into the United States.

“We try to give them more gifts and teddy bears because we know that they are coming with little to nothing upon entrance to the country,” says Dr. Daran Kaufman, director of pediatric emergency services at North Central Bronx Hospital. “You do see that some of these kids — not all of them, but some — are a little bit more withdrawn and sad, so showing that extra bit of kindness could make some difference.”

At least 12 migrant children who were separated from their parents and placed into temporary foster care have been treated at New York City hospitals, NYC Health + Hospitals CEO Dr. Mitchell Katz said Thursday. (Since clinicians typically do not ask about patients’ immigration status, the actual number is likely higher.) Eight have been treated at North Central Bronx, while four received care at Manhattan’s Bellevue Hospital. Kaufman says most cases have involved medical issues such as asthma, strep throat and constipation, though one child did show signs of depression and suicidal ideation.

“It’s been quite trying to see these children coming into the emergency room without their parents and seeing how sad and withdrawn they are given what’s happened,” Kaufman says.

Multiple medical groups have spoken out against the White House’s practice of separating parents caught illegally crossing the border from their children, citing the potentially irreparable psychological harm that may occur as a result. President Donald Trump curtailed the family-splitting aspect of his zero-tolerance immigration policy with an executive order Wednesday, but some experts have said detaining families together may also come with mental health risks for children.

In a letter sent to his staff Thursday, Katz wrote that signs of such trauma are already appearing among patients at New York City hospitals.

“We have seen children as young as five and have treated teenagers who have presented with signs of anxiety, trauma, and stress-related illness, including one extreme case of a teen with suicidal ideations after being separated from his mother,” Katz wrote. “We know the health risks associated with tearing apart children from their families are very real, including an increased risk of anxiety, depression, post-traumatic stress, and attention-deficit disorder. And the demand on health care professionals in NYC and across our country will undoubtedly continue to grow.”

Indeed, roughly 700 separated children have been placed into foster care agencies in New York state, according to Gov. Andrew Cuomo, meaning more are likely to trickle into area hospitals. Kaufman says she and her colleagues do expect to see more of these cases, and will continue to look out for warning signs of associated psychological distress and other issues. But that’s not always easy, because, as Katz wrote in his letter, children and their government-appointed guardians have been arriving at emergency departments with “no access to medical records” and “no way of getting in touch with a family member to get a medical history.”

“We don’t have a parent to rely on to understand what the patient’s medical history is, so we’re trying to use clues through siblings” and physical exams, Kaufman says. “We have been able to diagnose these patients without their medical history and so we’ve been okay, but that’s not to say that in the future, without medical history, we won’t run into trouble.” 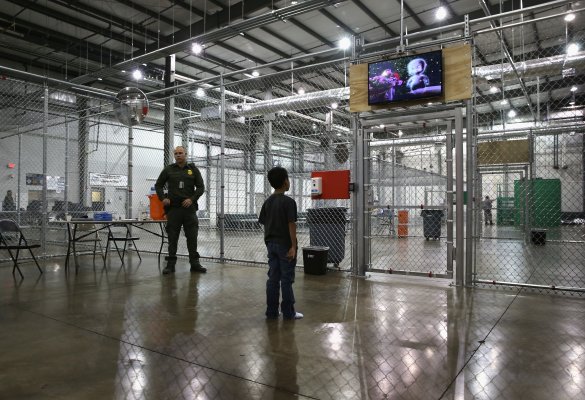 There Are Effective Alternatives to Family Detention. The Trump Administration Already Ended One
Next Up: Editor's Pick