Trump Is Trying to Dismantle the World Order. Is NATO Next on His List?

The 29 countries in the North Atlantic Treaty Organization are not referred to in its statutes as members or signatories but as allies. As the military grouping nervously prepares for a July 11/12 summit, 28 of those nations’ leaders may be forgiven for wondering whether that word still describes the country led by the 29th.

In the space of two weeks in June, U.S. President Donald Trump first baited his supposed friends into a trade war by slapping tariffs on steel and aluminum from the European Union, Canada and other nations. He argued that Russian President Vladimir Putin – still under E.U. and U.S. sanctions for the annexation of Crimea – should be invited back into the G7, before rejecting the summit’s communique and personally insulting Canadian Prime Minister Justin Trudeau. All that before he met North Korean dictator Kim Jong Un and called him a “very talented” leader.

This dismantling of long-established norms of global diplomacy has many wondering whether NATO, the alliance that has preserved global stability since the darkest days of the Cold War, is the next foundation block of the current world order that the President plans to uproot.

“All of that left the friends and allies of the United States wondering, who is the leader of the democratic world?” Anders Fogh Rasmussen, the previous secretary general of NATO, tells TIME. “And if that is repeated in Brussels in July it would be no less than a disaster, not only for the Western democratic world but for the democratic world globally.”

There are many targets of Donald Trump’s ire, but NATO has long played a key role in his narrative of the U.S. footing the bill for the rest of the world at the expense of its own citizens. He has repeatedly railed against the U.S. putting up a disproportionate amount of funding for NATO.

The U.S. accounts for 22% of the NATO alliance’s common funding, which is spent on projects like military readiness, joint exercises, and initiatives to counter cyber-warfare, and is responsible for 70% of total defense spending among alliance members. Under pressure from Washington — and reacting to Russian aggression — NATO members agreed in 2014 to each increase defense spending to 2% of GDP by 2024. But progress has been slow; so far only eight NATO countries meet that target.

While many Europeans, including Rasmussen, agree with Trump’s general point about defense spending, his method of expressing it is exasperating allies. On June 10, a day after the G7 summit, Trump launched a Twitter tirade clearly aimed at Europe, lamenting that the U.S. spends money “protecting many of these same countries that rip us off on trade”, and warning that “change is coming”.

On trade and the G7, European leaders are feeling empowered to punch back at the U.S. French President Emmanuel Macron said recently that the G7 could do without Trump, while on trade the E.U. this week retaliated with their own tariffs on US goods. “The initial idea of playing nice with Donald Trump, which several European leaders have tried, has been demonstrably proven to yield no benefits,” says Anthony Gardner, who acted as U.S. Ambassador to the E.U. from 2014 to 2017.

But there is far more at stake when it comes to NATO, especially on the front line of the new antagonistic relationship with Russia. Since Putin annexed Crimea in 2014, nations along NATO’s eastern flank have been increasingly concerned by Russian aggression along their own borders, and still see the U.S. as the most important backer of their security.

“Without the United States, European security would be in great danger,” Latvian Foreign Minister Edgars Rinkevics tells TIME. “We can’t simply build something that would exclude the United States – this is simply impossible: look at the resources, look at capabilities.” While he predicts “long, very difficult, very heated meetings” at the July summit, Rinkevics believes a consensus is still within reach.

Trump’s abrupt cancelling of joint military exercises on the Korean peninsula after his meeting with Kim has also raised questions about whether war games in Europe could suffer a similar fate. Just this month, the U.S. led joint exercises in the Baltics and in Poland with 18 other nations. Rinkevics, whose country helped host these exercises, is confident the war games will continue. “I don’t believe that there is going to be such kind of development,” he says, even if Trump does make good on suggestions of a U.S.-Russia summit.

Yet the tensions between the U.S. and Germany may again come to the fore. Not only does Germany spend comparatively less on defense than other major powers, but Trump has recently taken Chancellor Angela Merkel to task over her refugee policy that is currently the subject of a bitter domestic political feud.

“He is picking on Germany more than anyone else for a simple reason: he wants Merkel to fail and he wants the migration issue to demonstrate the failure of her policies,” says Gardner. “It is a remarkable situation of the President of the United States attacking one of our closest and dearest allies, basically for domestic purposes.”

The embattled Merkel will be keen to avoid a further spat with Trump, says Christian Mölling, deputy director of the German Council on Foreign Relations. With that in mind, German defense officials travelled to Washington for meetings ahead of the summit to try and sell to their U.S. counterparts a plan to increase defense spending to 1.5% by 2024. “She will definitely want to prevent a public fight with Trump, if that is possible, because he holds the cards given the fact that he can always choose to come up with the 2% discussion and Merkel would be on the defensive side,” says Mölling.

Rasmussen urged NATO members to keep discussions about defense spending behind closed doors, cautioning that a public disagreement may raise public doubt over America’s commitment to Article 5, the clause which says that all NATO members will respond if one of their number is threatened. “Putin might take it as a signal that when push comes to shove, the Americans will not be ready to really defend its allies, so it sends a very dangerous signal to autocrats,” he says.

The former NATO general secretary hopes that the President will take advice from figures like Defense Secretary James Mattis, who has served as a NATO Supreme Allied Commander and, he says, understands the importance of the alliance.

At last year’s summit, Trump caused a stir by refusing to explicitly affirm his commitment to Article 5 in a speech in front of a memorial to the attacks of Sept. 11, 2001, when the U.S. became the first member to invoke the clause. He swiftly corrected that a few weeks later, most likely on the advice of his national security team.

But the concern in European capitals is that Trump will ignore his counsellors this time around, says Heidi Obermeyer, a fellow at the German Council on Foreign Relations. “Worst case is Trump goes in, even more angry that nobody is doing anything, and calls into question the validity of Article 5, or says that he is going to try and remove American troops from Europe – all gift-wrapped in a beautiful box for Vladimir Putin,” she says.

And the best-case scenario? “A lack of criticism,” says Obermeyer. Given the President’s recent approach to diplomacy, even that may be too much to expect.

Correction: The original version of this story misstated the United States’ share of NATO’s budget. It is 22%, not 70%, which is the U.S. share of total defense spending by NATO allies. 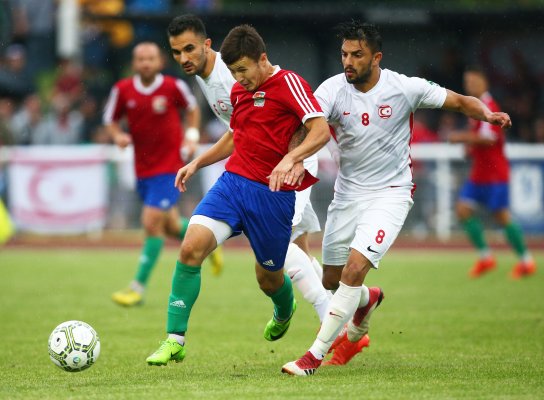 The Alternative World Cup You Might Have Missed This Summer
Next Up: Editor's Pick