Five Charity Workers Were Kidnapped and Gang-Raped in East India

In the latest sexual assault scandal to hit India, five charity workers in the country’s remote east were kidnapped and gang-raped at gunpoint.

The women said they abducted while putting on a play about human trafficking in the largely tribal Khunti district of Jharkhand state, AFP reports.

The women, who were working for a non-governmental organization called Asha Kiran supported by a local Christian missionary group, were reportedly video-taped and warned not to go to the police.

“We have been questioning several people,” police officer Rajesh Prasad told AFP, adding that police are awaiting results from the women’s medical tests.

Several members of a self-rule movement called Pathalgadi have also been rounded up, AFP reports. The movement, popular in some tribal villages, is known to be resentful of outsiders.

The area is also a hotbed of guerilla insurgents.

India has seen a series of horrific sexual assault cases in the last year. In December, the rape and murder of a six-year old girl in the northern state of Haryana sparked outrage across the country. In April, thousands of protesters flooded the streets in response to the gang rape and murder of another eight-year-old Muslim girl.

In Jharkhand, three teenagers were raped and burned alive in separate incidents last month, according to the BBC. 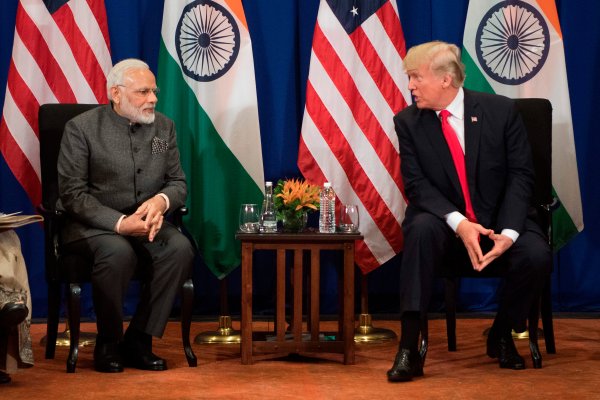 Russia Is a Stumbling Block for Growing U.S.-India Links
Next Up: Editor's Pick