First Lady Melania Trump said that her visit to the U.S.-Mexico border on Thursday reminded her that the detained children she visited were there “as a direct result of adult actions.”

It was not immediately clear whether the First Lady was referring to the children’s parents or U.S. government officials when she said their situation was caused by “adult actions,” but her comments echoed those of President Donald Trump, who has falsely blamed Democratic members of Congress for his administration’s policy separating parents and children apprehended at the border.

During her unannounced visit to the border, the First Lady had planned to stop at two facilities in McAllen Texas: a border patrol center that processes migrant families and a detention center for children who have arrived from Central America.

Severe weather prevented her from visiting the families at the border patrol center, but she toured the Upbringing New Hope children’s center and participated in a roundtable discussion where she asked questions about how children were cared for in the facility.

“I was very impressed with the center and the hardworking staff and leadership there – and thank them for all of their hard work. The children were eager to learn and were kind and in good spirits,” the First Lady said in a statement after she returned to Washington, D.C. on Thursday. “Spending time with them reinforces the fact that these kids are in this situation as a direct result of adult actions. It is my hope that Members of Congress will finally reach across the aisle and work together to solve this problem with common sense immigration reform that secures our borders and keeps families together.”

The First Lady’s visit came one day after her husband signed an Executive Order to keep immigrant families together while they are detained following intense pressure over his administration’s “zero tolerance” policy.

The First Lady sparked controversy by wearing a jacket on her way to Texas that said “I really don’t care. Do U?” 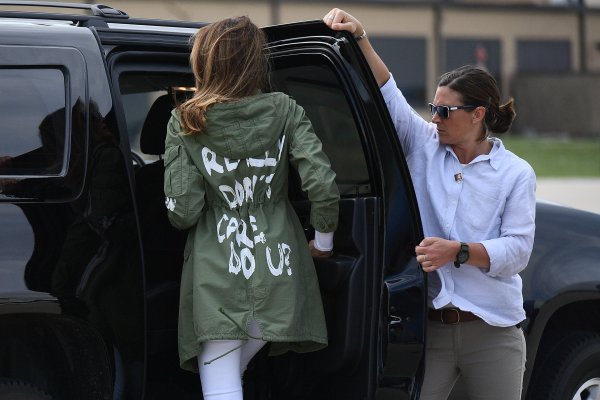 Melania Trump's 'I Really Don't Care' Jacket Did Not Go Over Well
Next Up: Editor's Pick