There Are Effective Alternatives to Family Detention. The Trump Administration Already Ended One

During the fight over his family separation policy, President Donald Trump repeatedly argued that it was the only alternative to simply letting parents caught crossing the border go free.

Now that he’s ended the policy, the Trump administration is pursuing another option: holding families together in detention centers.

But immigrant advocates, who note that approach has already faced successful legal challenges in the past, argue that there are other alternatives that the Trump Administration isn’t considering, including one program with an extremely high success rate that Trump already ended.

One option is to use a combination of GPS tracking and home visits to keep tabs on immigrants who have been picked up, allowing them to stay out of detention while their case works through the legal system.

That program is dramatically cheaper, costing around $4.50 per day, according to a Department of Homeland Security estimate, compared to the $134 per day it costs to hold an adult in immigrant detention. It takes about $319 per day to hold an individual in a family detention center in 2018, according to DHS.

Between 1997 and 2000, the Vera Institute of Justice observed a group of 500 asylum seekers and criminal non-citizens facing removal that participated in a supervised release program. According to a fact sheet from the American Immigration Lawyers Association on alternatives to detention, 91% of the participants appeared at the required hearings.

Another alternative was the now-shuttered Family Case Management program, which paired families who helped them navigate the immigrant process and life in the U.S. That program, which had around 630 families enrolled when the Trump Administration ended it in mid 2017. Shepherd says it had a “a success rate of almost 100%” when it came to getting immigrants to appear in court and meet with immigration officials.

But Trump has argued that policies which allow immigrants caught crossing the border to stay out of detention amount to “catch and release” and encourage other people considering immigrating illegally to try to cross the border too.

“The dilemma is that if you’re weak, the country is going to be overrun with millions,” Trump said Wednesday. “And if you’re strong you don’t have any heart.”

For now, immigration advocates are focused on raising concerns about family detention centers, where parents and children are kept while their cases work their way through immigration courts.

“We would be incredibly concerned if this administration moves towards family detention practices that we’ve seen in the past,” says Katharina Obser, senior policy advisor in the Women’s Refugee Commission Migrant Rights and Justice program.

Trump’s executive order seeks an amendment to the 1997 Flores settlement, which requires that minors to be placed in the “least restrictive” settings as soon as possible. The Trump Administration has said that settlement forced their hands on the family separation policy once they had settled on a “zero tolerance” policy of referring everyone caught crossing the border for criminal prosecution.

But advocates say that family detentions are inhumane.

The Women’s Refugee Commission, which has long observed the practice of family detentions, has released multiple reports over the last decade on family detentions which argued that there is no humane way of detaining families. The reports found that there was poor access to medical care, mental health treatment was insufficient, and some documented reports of abuse.

“It was clear that family detention was traumatizing to the families that were detained there,” says Obser. The American Academy of Pediatrics has also found that detention can have a negative effect on both children and adults.

Following a surge of migrants in 2014, the Obama Administration increased the use of family detention. Immigration advocates sued to stop the detainments, arguing they violated the Flores agreement. The plaintiffs prevailed and as a result, a federal court ruled that the settlement applies to both unaccompanied minors and those who’d traveled with a parent or guardian. Cornell Law Professor Stephen Yale-Loehr says the Trump administration’s interest in amending the Flores agreement raises a lot of questions and could ultimately lead to more legal headaches.

“The Obama administration unsuccessfully tried to amend the Flores decision. It is unlikely the Trump administration will be any more successful. What then?” Yale-Loehr said. “In sum, the executive order will almost certainly lead to more confusion and litigation.” 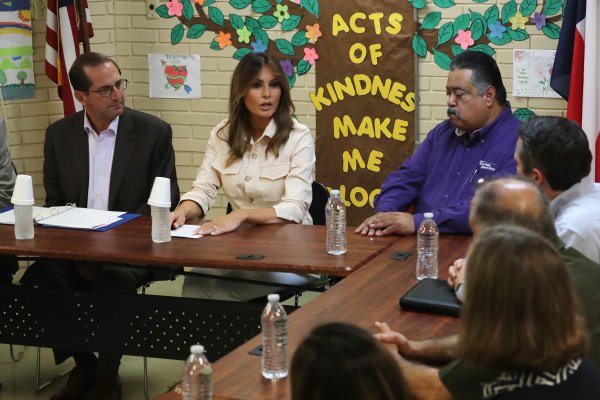 Melania Trump Says Children in Detention Center Are There 'As a Direct Result of Adult Actions'
Next Up: Editor's Pick