Why Authoritarians Love to Quote This Bible Passage

Ruben Garcia, director of the Annunciation House, speaks with Karla (who didn't want her last name used) before he helps her cross the Paso Del Norte Port of Entry to ask for asylum for herself and her grandchild in the United States on June 20, 2018 in Ciudad Juarez, Mexico. The Trump Administration's controversial zero tolerance immigration policy has led to an increase in the number of migrant children who have been separated from their families at the southern U.S. border. U.S. Attorney General Jeff Sessions has added that domestic and gang violence in immigrants' country of origin would no longer qualify them for political asylum status.
Joe Raedle—Getty Images
Ideas
By Jonathan L. Walton

Walton is the Plummer Professor of Christian Morals and Pusey Minister in the Memorial Church of Harvard University. He is the author of A Lens of Love: Reading the Bible in Its World for Our World

Interpreting the Bible is not easy. The Bible is an assortment of sacred myths, metaphors, and allegories born of a world very different than our own.

Though its writings predate many critical scientific discoveries regarding the natural world, both the Hebrew Bible and New Testament are replete with lasting moral truths and inspirational accounts. The folly of greed, cruelty, and malice comes through in the lives of notable biblical characters. Conversely, numerous proverbs and parables bear witness to the wisdom of generosity, compassion, and gratitude. This is why most responsible interpreters filter every passage of scripture through the lens of a God “who executes justice for the orphan and widow, and who loves the strangers, providing them food and clothing” (Deuteronomy 10:18). The prophets, wisdom literature, and gospels extend this preferential option for the most vulnerable. As we treat the hungry, sick and imprisoned, we treat God (Matthew 25:31-40).

Yet there is another tradition of interpretation that has unfortunately proven more prevalent: that for which the Bible serves as a source of covetous power.

Historically, such interpreters filter every verse through a lens that privileges acquisition of assets and authority over altruism and our own comfort over compassion. Hyperbolic denunciations of particular enemies in scripture become a universal license to hate and condemn others. Paul’s defense of slavery, patriarchy and imperial power are used to sanctify an unjust status quo. Martin Luther’s condemnation of the Jews as a “whoring” people, the Spanish Crown’s justification of genocide against Indians in the Americas, and Andrew Jackson’s defense of chattel slavery and the Indian Removal Act of 1830 are just a few notable examples of perverted biblical interpretation. No wonder so many pages of the Bible are filled with the blood of anti-Semitism, racism, sexism and colonialism.

Such a desire for power appears to be the interpretive lens of many evangelical Christians today. They employ a highly selective Scrabble game of Bible verses to provide spiritual cover for mean-spirited policies. Appeals to scripture become a way to baptize our bigotries and consecrate our callousness. Like Aaron at the foot of Mt. Sinai, fear causes us to create gods in our image—a veritable golden calf comprised of the things that we most cherish (Exodus 32).

Whether proponents of slavery in the antebellum South or enemies of civil rights protests in the twentieth century, few verses have been cited more by the defenders of inequality than Romans 13:1. “Let every person be subject to the governing authorities; for there is no authority except from God, and those authorities that exist have been instituted by God.”

Robert Jeffress, the pastor of First Baptist Dallas, which has a congregation of 12,000 people, appealed to Romans 13 last year, when Trump made a series of inflammatory statements about North Korean leader Kim Jong Un. Jeffres claimed Trump had spiritual authority to wage pre-emptive war. “When it comes to how we should deal with evildoers, the Bible, in the book of Romans, is very clear: God has endowed rulers full power to use whatever means necessary—including war—to stop evil.” That preachers like Jeffres fail to interrogate which authority God ordains is telling. As was the case in the Civil War, it is convenient for all sides to claim God’s sanction as their own.

Most recently, Attorney General Jeff Sessions used this verse to justify separating immigrant children from their families. Responding to criticism from the U.S. Conference of Catholic Bishops regarding the cruelty of this practice, Sessions declared, “I would cite you to the Apostle Paul and his clear and wise command in Romans 13 to obey the laws of the government because God has ordained the government for his purposes.”

And when confronted by reporters in the White House briefing room regarding Sessions remarks, press secretary Sarah Huckabee Sanders piggybacked Sessions sentiment with, “it is very biblical to enforce the law.”

There is a reason that Romans 13:1 has been the Bible verse of choice for demagogues and upholders of inequitable systems. Imperious appeals to divinely sanctioned authority place state law under the protection of a sacred façade. When quoted in isolation as opposed to the particular context and community to whom Paul was writing (the early Jewish and Gentile followers of Jesus who were starting assemble throughout Rome), Romans 13 sanctifies political oppression while adorning civic authority in ecclesial garb. Human law becomes indistinguishable from God’s presumed will.

Two things should dissuade us from such a perverted reading of scripture.

First, there is the lesson of history. Where would we be as a nation if simplistic appeals to law and order prevailed among people of faith?

Slavery was legal in the United States, as was Japanese internment. Segregation was legal, as was forced sterilization. The law can be a viable conduit for injustice and mass suffering. If it were not for courageous citizens willing to raise moral voices against legal acts of inhumanity, the toxic fumes of hatred would have asphyxiated our nation long ago. In the words of abolitionist Angelina Grimke, “If a law commands me to sin I will break it; if it calls me to suffer, I will let it take its course unresistingly.”

Second, the most memorable stories in the Bible involve men and women protesting authority with a higher moral ideal of love and justice.

Moses stood before the power structure of Egypt to declare that Hebrew lives matter. Esther intervened on behalf of her people when the Persian king labeled Jews illegal. And the state put Jesus to death by crucifixion, a form of execution reserved for those who dared to challenge imperial power. The Bible gives pride of place to those—who like Dorothy Day, Oscar Romero, Rosa Parks in our world—stood up for a higher moral law in their world.

Too many dark moments in history prove that unqualified obedience has no place in a democracy or among Christians. An interpretive lens of power weaponizes sacred scripture and turns our partisan allegiances into false idols. Sadly, it looks like many American evangelicals have found their golden calf of fear and hatred. Not surprisingly, it has “TRUMP” embossed along the side. 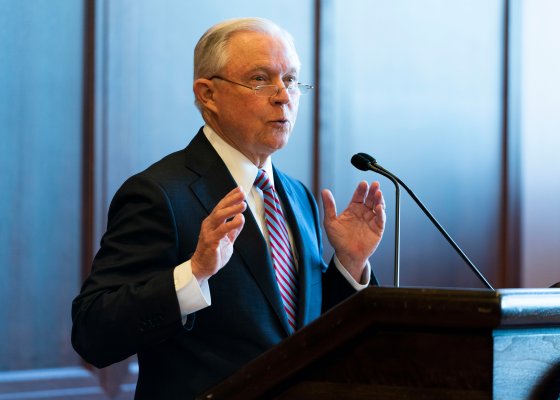 Jeff Sessions Left Out the Key Part of the Bible Verse He Used to Rationalize Family Separation
Next Up: Editor's Pick