There’s Hope for a Vaccine to Prevent Type 1 Diabetes

Could a vaccine for type-1 diabetes be on the horizon? In a new study, a small group of people with type 1 diabetes who were given a vaccine showed improvement in their blood sugar levels to nearly normal levels—and the changes lasted for five to eight years.

The study, published Thursday in the journal npj Vaccines by researchers at Massachusetts General Hospital, looked at nine people with type 1 diabetes who were given a vaccine to prevent tuberculosis, called bacillus Calmette-Guérin (BCG). They had two injections, four weeks apart.

Levels of their hemoglobin a1c (HbA1c), which measures a person’s blood sugar, dropped more than 10% three years after treatment and by more than 18% four years after treatment. The researchers also found that the blood sugar levels of people in the trial were able to remain at near-normal levels for up to eight years. On average, the people in the trial had lived with type 1 diabetes for 19 years.

The BCG vaccine has been used for decades to prevent tuberculosis, and the researchers believe it could be used for other autoimmune disorders, including type 1 diabetes. The Massachusetts General Hospital study is ongoing, and so far more than 120 people with type 1 diabetes have been treated with at least two doses of the vaccine. (The new study shows the results of nine of the people in the study who have been followed for more than five years.) The men and women have not experienced complications and are performing better than people in the trial given the placebo or the people serving as controls, researchers say. Everyone is still being treated for their diabetes, but the people who have received the vaccine are using about one-third less the amount of insulin as they did prior to vaccination, STAT News reports.

The researchers are not sure why the effects of the vaccine appear to take a couple years to kick in. “Diabetes didn’t occur in a day, and maybe the reversal doesn’t occur in a day,” says lead study author Dr. Denise Faustman, director of the MGH Immunobiology Laboratory.

Faustman and her team are also exploring a possible mechanism for why the vaccine may help lower blood sugar levels in people with type 1 diabetes. It appears, in mice studies, that the vaccine can increase the levels of immune system-protective T cells, and alter cell metabolism so that cells consume more sugar out of the blood. Both of those pathways could help keep blood sugar levels in check.

Some diabetes researchers are skeptical that the findings will prove to be a major advance. “This could be something that happened by chance because people were a bit more diligent or leaner or more compliant with diet,” Dr. Adrian Vella, an endocrinologist at the Mayo Clinic, told NBC News.

More studies need to be done to replicate the findings. Faustman says that if there was more funding for the research, her team would also start studying the effect of the vaccine for children. “[Diabetes] is torturous for kids and torturous for their parents,” she says. 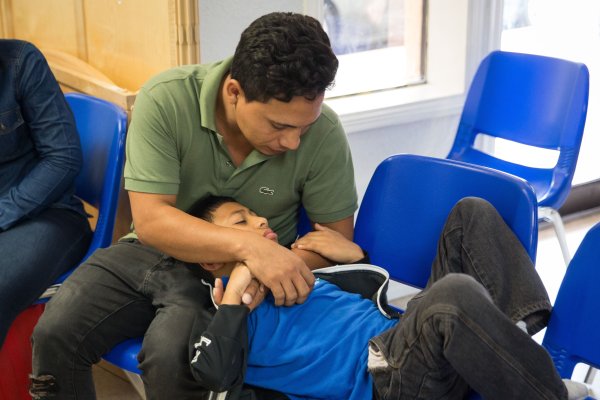 Separating Kids From Parents Can Cause Psychological Harm. But Experts Say Detaining Them Together Isn't Much Better
Next Up: Editor's Pick