First Lady Melania Trump paid an unannounced visit to the U.S.-Mexico border on Thursday, one day after President Donald Trump signed an Executive Order to keep families together amid an outcry over his Administration’s policy that was tearing them apart.

The First Lady is visiting two facilities in McAllen Texas: a shelter for migrant families that is under the auspices of the Department of Homeland Security, and the Upbring New Hope Children’s Shelter, which currently houses over 50 children from Central America

“First Lady Melania Trump has arrived in Texas to take part in briefings and tours at a nonprofit social services center for children who have entered the United States illegally and a customs and border patrol processing center,” her office said in a statement. “Her goals are to thank law enforcement and social services providers for their hard work, lend support and hear more on how the administration can build upon the already existing efforts to reunite children with their families.”

Trump’s Communications Director Stephanie Grisham told reporters that the First Lady had suggested making the trip on Tuesday – othat *ends the Administration’s policy of separating children and parents at the border.

The Trump Administration had been encountering a deluge of outrage all week after government officials confirmed that more than 2,000 children had been separated from their parents in the past five weeks, a direct result of the “zero-tolerance” policy Attorney General Jeff Sessions implemented in May. The policy mandates criminal prosecution for anyone caught illegally crossing the border. Consequently, adults crossing with their children were detained under the auspices of the Department of Homeland Security, while the children were held in facilities run by the Office of Refugee Resettlement.

Under the Executive Order the President yesterday, children who come to the border with their parents will be allowed to remain with them, but the “zero tolerance” policy will remain in place. The order is virtually certain to encounter legal challenges, however, and questions still remain about whether the children who were already separated from their parents will be reunited.

The order came after the policy, amplified by photographs of tearful children, audio recordings of their wails and first-hand accounts of these separations, drew condemnation across the globe and from both sides of the aisle – including from the First Lady. She issued a statement this Sunday, telling CNN she “hated” to see parents separated from their children and had been lobbying her husband to take action. President Trump acknowledged his wife’s visit at his cabinet meeting, noting that what she had seen “really bothered her.”

“She supports family reunification,” said Grisham. “She thinks that it’s important that children stay with their families.” 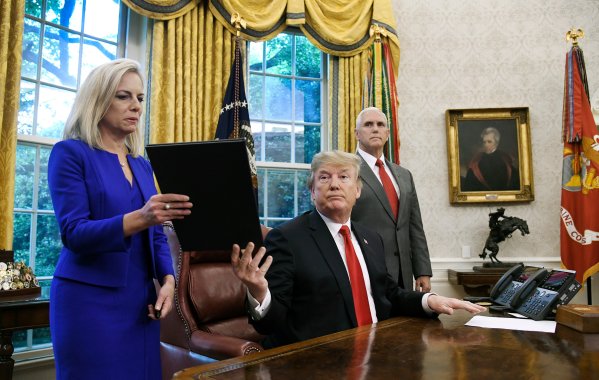 Trump Backed Down, But the Crisis at the Border Is Far From Over
Next Up: Editor's Pick