'He Might Change His Mind in Minutes or Hours.' Migrant Mothers React to Trump Ending Border Separations

Josefa Espinoza Ayala was showing me photos of her grandchildren on her phone when she received a notification that President Trump had announced an end to the policy of separating families at the border. She and the twenty-some other migrants who had been deported from the U.S. to this migrant assistance office in Juárez, Mexico, talked amongst themselves, wondering if Trump would change his mind again in the next few minutes or hours. “I just heard the news about Trump,” Espinoza Ayala said, “but then a woman arrived here whose children had been separated from her.” A young man with wide shoulders and tattoos snaking down his arms chimed in: “I’ve spent time in jail and even I know that it is wrong to separate kids from their parents.”

Espinoza Ayala, 49, said she raised her two daughters, her son, and her grandchildren in Michoacán, Mexico, a region that has suffered from ongoing cartel violence and which was recently occupied by the Mexican Army. She said that, in 2016, her daughters and grandchildren fled the danger, crossed the border, and requested and received asylum in the U.S. They now live in California. Afraid for the lives of their mother and brother, who had recently been run out of their own home due to violence, they urged Espinoza Ayala and her 18-year-old son to request asylum in the U.S. too.

So in May, Espinoza Ayala and her son, a farmer, crossed the border into the U.S. together, but she said they were immediately separated. “I haven’t talked to my son in over a month,” Espinoza Ayala said, noting that neither she nor her son had done anything illegal in requesting asylum. Her son was deported back to Mexico, and she was taken to a detention center in El Paso, Texas. She had no way to communicate with him — it was too expensive to make phone calls from the detention center.

Alone in detention, Espinoza Ayala felt for the other mothers separated from young children. “You’d hear them weeping at night,” she said, ducking her head and clasping her hands, the weariness on her face evident under the fluorescent lights. “They didn’t offer any help for mothers separated from their children. They yelled at them,” she said of the staff in the detention center. Espinoza Ayala couldn’t sleep, and spent most nights crying silently into her pillow. “They took children from their mothers like savages,” she said.

After a month in detention, Espinoza Ayala gave in. “I didn’t want to spend a year waiting,” she said. The asylum process seemed unsure now, and she’d have to stay in the detention center indefinitely to find out if she’d be approved. “I had to choose between waiting for asylum and going to find my son,” she said. She decided to withdraw her request for asylum and let herself be deported.

Espinoza Ayala was one of only two women at the migrant assistance office — the Oficina de Apoyo a Migrantes in Juárez — but the other, who had also been separated from a child, wanted to try to reenter the U.S. and didn’t want to speak on record for fear of how the Trump administration might respond. At the Migrant Shelter Casa del Migrante Diócesis de Ciudad Juárez in Mexico, two women from Honduras, both mothers, said they would also continue to cross the border into the U.S. “We left our kids at home,” said Mariel Carmen Rodríguez, 44. “I have three kids, and it hurt me to leave them, but when we got here and I found out what was going on I said, ‘God, you saved my kids.’ What the president is doing is wrong. Taking away our children is taking away what we most love.”

Josefa Espinoza Ayala waits inside the migrant center in Juárez, Mexico. She was separated from her son more than a month ago, and hopes to be reunited with him this week.
Alice Driver

Sitting next to her, Ana María, who asked to be identified by her first name only, began to cry. Although the Trump administration policy of separating families was implemented to deter immigrants, the statistics show a 5% increase in the number of people caught crossing the border illegally compared to figures from April. “We know that Donald Trump is doing things that he shouldn’t be doing. He should get in touch with his conscience,” Ana María said. She had not yet heard the announcement that Trump had signed an Executive Order to stop the family separations at the border. “We are all humans,” she said, “We are all children of God, and he shouldn’t be doing this.” Rodríguez, who hoped to be reunited with her children one day, said that she would count on God to continue to take care of her as she crossed the border.

Espinoza Ayala, on the other hand, said she has no desire to return to the U.S. She’s just hoping to be reunited with her son this week. “I don’t care if we have to live under a bridge,” she said, it would be better than the detention center, and better than being apart. When I asked if she had any advice for the women preparing to cross the border, she wasn’t hopeful the situation would improve. “I’m going to tell them not to go,” she said. “Don’t go. You don’t know how they behave there.”

Her grandchildren in California smiled up from her phone, the girl in a dress that’s an explosion of turquoise ruffles, the boy in a sombrero, a wide grin sweeping across his face. 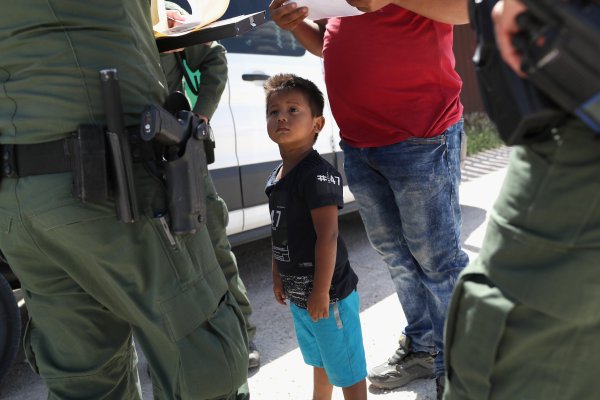 Exclusive: U.S. Attorney in West Texas Drops ‘Zero-Tolerance’ Charges Against Migrants Who Came With Children
Next Up: Editor's Pick