In the race for Turkey’s presidency, a candidate is entitled to 20 minutes of television time – even, it turns out, from prison. In what state media are calling a “first in the history of democracy,” Kurdish candidate Selahattin Demirtas, who was arrested during the crackdown that followed a failed military coup in 2016, gave a speech from his cell on June 17. Demirtas has little chance of winning, but his pro-Kurdish party could hold the key to the parliament; he implored voters to use the June 24 elections to keep Turkey from turning into a “one-man regime” under President Recep Tayyip Erdogan.

After the attempted coup, Erdogan put into effect a state of emergency, purged more than 150,000 public officials and arrested more than a dozen opposition lawmakers. Demirtas, who has been a legislator since 2007, was accused of spreading propaganda for Kurdish insurgents and sent to prison. But he claims he was jailed on spurious charges because Erdogan fears him. “He used the fear of violence as a weapon,” Demirtas said in a 2015 interview with TIME, before his arrest. “This is how he rallied society around himself.”

Demirtas needs to persuade 10% of voters to back his party in the parliamentary elections, which run at the same time as the presidential election. That’s the legal threshold for lawmakers to take their seats, and support hovers around that number nationally, according to polls. Those seats will likely decide whether Erdogan’s party gets a majority.

If Demirtas succeeds, that could disrupt Erdogan’s plans far beyond election day. A hung parliament would make it difficult to exercise the sweeping powers that a constitutional referendum last year secured for the next President. Those powers – to issue decrees, appoint ministers, decide the budget and control security – would make Erdogan an even more authoritarian leader than he is already. Whether he succeeds could now hinge on a man his government jailed years ago. 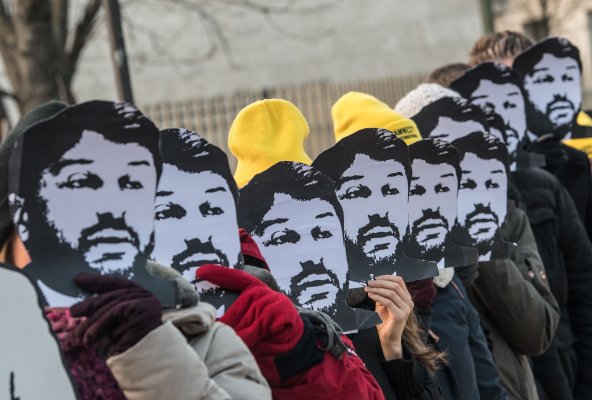 Today I Visited My Turkish Colleague in Prison. Erdogan’s Crackdown Must Stop
Next Up: Editor's Pick