Trump Backed Down, But the Crisis at the Border Is Far From Over

It is a crisis Donald Trump created and always had the power to solve. At detention facilities across the country, children are penned in cages, crying out piteously for the parents from whom they have been torn by border agents on orders from Washington. Some children may never see their mother or father again.

In a presidency marked by serial outrages, the scandal over family separations at the southern border has been unlike any other. The President didn’t just say something offensive, he intentionally turned the machinery of the state on some of the world’s most vulnerable humans. He applied his signature approach–brutal toughness–to his trademark issue, immigration. He greeted criticism of his policy with mockery, falsehoods and blame-casting. He handcuffed the Republican Party and hamstrung understaffed federal agencies. All the themes of Trump’s character and Administration were embodied in this wrenching calamity.

At first, Trump embraced the outrage, as he so often does. Even as the pictures, video and audio began to trickle out of the detention facilities, and awful stories spread–a woman deported without her son; older children changing younger ones’ diapers–supporters predicted that Trump would stand his ground. “The President is stubborn enough to stick with this,” said Mark Krikorian, executive director of the Center for Immigration Studies, which advocates for tougher immigration laws. “If they can weather this, they can just about weather anything.”

But the images of young children sobbing for their parents created an outcry that neither Trump nor his opponents anticipated. Recriminations poured in, some of them from unexpected quarters. Evangelical leader Franklin Graham called it “disgraceful.” Former First Lady Laura Bush wrote a scathing op-ed. Even Melania Trump issued an unusual statement deploring the situation and worked her husband behind the scenes, according to a White House official. The President and his party faced a toxic scenario in an election year that was already looking grim. “It’s political insanity,” a top Senate Republican aide told TIME. “It will kill us.”

And so Trump did something he has rarely done as President: he backed down from the fight. At the urging of advisers, he signed an Executive Order on June 20 in an attempt to end family separations and instead detain children and parents together. He made clear he wasn’t happy about it. “The dilemma is that if you’re weak,” Trump told Republican leaders in the White House Cabinet Room, “the country is going to be overrun with millions of people. And if you’re strong, then you don’t have any heart.”

The inhumanity unfolding at the border has not just been a test for Trump. It has been, and will continue to be, a moment of reckoning for America. Trump has often bet that if he just rides out the current frenzy, the anger will fade and some new controversy will erupt. He thinks shock is a temporary condition, moral outrage is phony posturing and that the American people can be numbed to just about anything. If there is a Trump creed, it’s that there’s no such thing as going too far. That may have found its limit with putting children in cages. But as his “zero tolerance” policy heads toward a seemingly inevitable court battle, the jailing of kids may become the jailing of families–and we will see how much American hearts can withstand.

The idea of separating families was once a bridge too far even for Trump. John Kelly, then Secretary of the Department of Homeland Security (DHS) and now White House chief of staff, floated the policy publicly in March 2017, only to backtrack in the face of political concern. But Trump’s second year in office has been marked by the casting off of constraints and the marginalization of mainstream opinion. He has always believed that his stance against undocumented immigration was at the core of his political appeal, tapping working-class economic anxieties and latent nationalism.

So when the number of illegal crossings began to tick upward this year–the product of seasonal patterns and human-rights crises in Central America–Trump was infuriated. In meetings he berated Kelly’s successor, DHS Secretary Kirstjen Nielsen, and demanded that his staff find new approaches. Stephen Miller, Trump’s senior policy adviser and an immigration hard-liner, revived the zero-tolerance proposal: anyone caught crossing the border without authorization would be subject to prosecution and jailed to await trial. It was announced by the Department of Justice in the spring to little fanfare.

As the outrage grew, political panic set in. Polls showing that about two-thirds of Americans oppose the family separations prompted pushback from congressional Republicans. Immigration has long been the front line of the war for the soul of the GOP, with its business and donor classes favoring liberalization, while a vocal minority opposes anything it considers amnesty. Trump’s actions have only deepened those divisions. Says a GOP lawmaker: “I’m not sure the President realizes that this is hurting the entirety of the Republican Party.”

As Republicans grasp for a legislative solution, Trump declined to provide much clarity, let alone leadership. “I am behind you so much,” the President said at a closed-door meeting of House Republicans on June 19. “Pass the bill. Do something,” he said. Despite Trump’s Executive Order, House lawmakers still planned to vote on a pair of immigration bills on June 21. But even if Congress passed a bill, Republicans acknowledged, there was no guarantee that Trump would sign it. “It’s dangerous to take this President at his word,” a Senate GOP aide told TIME. “That’s not a judgment. That’s a statement of fact.”

What happens next for the parents and children detained at the border is just as murky. The President’s Executive Order calls for families to be detained together, ending the separation issue but creating new complications. It is likely to be challenged in court. Immigrants’ advocates fear that his move could defuse the public pressure as family separations give way to family internment camps. And there is still no system in place to reunite the thousands of children and parents already separated from one another.

Whatever misery this mess brings will lay squarely at the feet of the President. But what price he will pay remains unclear. Trump was elected on the strength of some searing truths about the American political system–that Washington was broken and politicians of both parties were hopeless lightweights–and also some searing falsehoods, including that a frightening, inhuman foreign threat was to blame for the nation’s problems. He placed a cynical bet on the American character, that our capacity for empathy only went so far. The outcome of the humanitarian crisis at the border will be a test of whether that wager was right.

–With reporting by BRIAN BENNETT, PHILIP ELLIOTT and NASH JENKINS/WASHINGTON 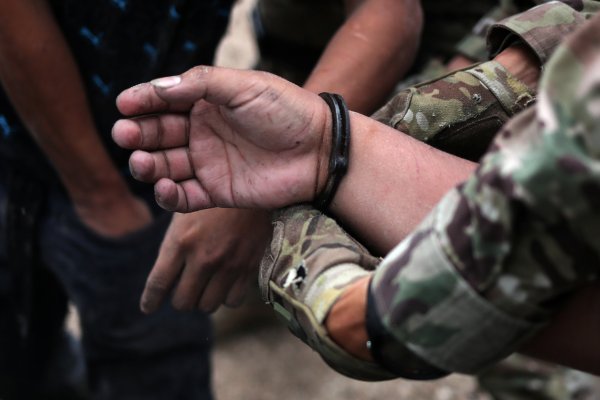 Hundreds of Immigrants Imprisoned In U.S. Can't See Lawyers
Next Up: Editor's Pick