Thousands of people gathered at Stonehenge in the United Kingdom Thursday to greet the sunrise for the summer solstice, the longest day of the year.

Wiltshire police estimated 9,500 people showed up to offer salutations to the sun at the Neolithic-era monument, which is located near the English town of Amesbury. The crowd erupted in cheers and applause when the sun appeared at 4:52 a.m. local time, the BBC reports.

“We are really pleased with how Solstice 2018 has gone. [It] really has been a great success,” Superintendent Dave Minty said in a statement posted to the police department’s Facebook page. “There was a really great atmosphere.”

Security measures were stepped up this year, the BBC reports. Two arrests related to intoxication were made at a solstice celebration at Avebury, another Neolithic stone monument site, according to police.

Read More: Today Is the Longest Day of the Year. Here’s What to Know About the 2018 Summer Solstice

Stonehenge is usually closed off to the public, but the ancient site is opened on the summer solstice by English Heritage, which supervises the country’s historic sites. On June 21, the sun rises behind the Heel Stone, channeling sunlight into the center of the circle of stone monoliths.

A man clasps his hands between stones as the sun rises at Stonehenge where people gathered to celebrate the dawn of the longest day in the United Kingdom.
Ben Birchall—PA Images/Getty Images

The solstice is believed to have been celebrated for thousands of years at Stonehenge, which is comprised of more than a dozen stone pillars that appear aligned to the solar cycle. In past years, tens of thousands have attended.

It is not known why Stonehenge was erected, or by whom, but many theories abound, from astrological or navigational calendars for ancient civilizations, to the work of wizards or extra-terrestrials. The monument is sacred to members of Britain’s Druid and Pagan communities, who observe various rites and rituals at the site, including on the winter solstice in December. 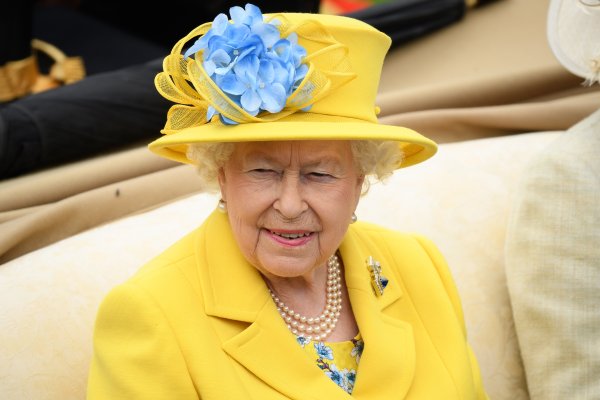 President Trump Will Meet Queen Elizabeth Next Month
Next Up: Editor's Pick