Hundreds of Immigrants Imprisoned in the U.S. Are Being Held 'Incommunicado'

A group of lawyers sued the U.S. government to allow them access to hundreds of immigrants who were transferred to a federal prison in California recently and who are being held “incommunicado.”

The federal government has said it wants to house about 1,000 detained immigrants in Victorville as part of its “zero-tolerance” policy under which it intends to prosecute every misdemeanor illegal entry violation, according to the complaint in federal court in Los Angeles. Since June 12, the government has been transferring detained immigrants from other parts of the county to the prison pending their proceeding.

“In countries around the world, holding prisoners incommunicado, with no access to legal help or even family, is the hallmark of despots and dictators,” Michael Kaufman, a lawyer with the American Civil Liberties Union who filed the lawsuit, said in a statement Wednesday.

Earlier Wednesday, President Donald Trump reversed course on his policy separating immigrant children from parents who cross the U.S. border illegally, signing an executive order that he said would end the practice. That reversal followed intense criticism from Congress and the public over the separations.

The detainees held at the Victorville prison may face summary deportation without legal assistance, according to the complaint. Unlike in criminal cases, detained immigrants aren’t automatically provided a lawyer by the government and must themselves contact one.

A lawyer with Immigrant Defenders Law Center who tried to visit the prison east of Los Angeles was told the facility wasn’t set up for visits and that Immigrant and Customs Enforcement hadn’t authorized any visits, according to the complaint.

A spokeswoman for the ICE field office in Los Angeles declined to comment on pending litigation.

“As standard procedure, ICE detainees have access to visitors and immigration attorneys,” Lori Haley said in an emailed statement. She said ICE continues to coordinate with the Bureau of Prisons to ensure detainees have appropriate access to their legal representatives. 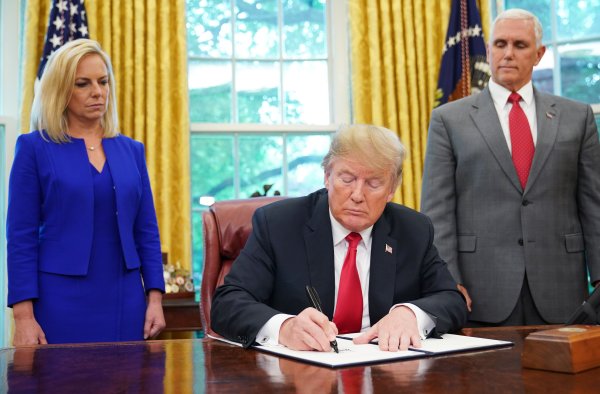