Separating Kids From Parents Can Cause Psychological Harm. But Experts Say Detaining Them Together Isn't Much Better

With an executive order on Wednesday, President Donald Trump put an end to the controversial practice of separating migrant parents caught illegally crossing the border from their children. The practice had drawn widespread criticism, including from medical experts, who cautioned that forced family separation could cause irreparable psychological harm to children.

But experts warn that the alternative — detaining families together — may also pose serious risks to kids’ mental health, potentially increasing the incidence of everything from PTSD to suicide.

Steve Lee, a professor of psychology at the University of California Los Angeles and president of the Society of Clinical Childhood and Adolescent Psychology, says there’s little question that forced separation, particularly resulting from adult incarceration, is “more pernicious in terms of its effects on psychological development and well-being in kids.” Still, that doesn’t mean children held alongside their parents will emerge unscathed, Lee says.

The uncertainty and stress that comes with detainment — not knowing “how long they may be there, the provisions there, if there’s going to be another forced separation in the future” — may affect children in multiple ways, Lee says. Children old enough to understand the situation may feel the effects of stress on an individual level. And regardless of age, kids may also internalize the stress felt by their parents, Lee says.

“We rely so much on our caregivers to model for us, to socialize us,” Lee says. “It really does influence the child’s response to the environment going forward, even if it’s not as acute as with forced separation.” Long-term consequences, he says, could include difficulty regulating emotions and forming healthy relationships, anxiety, depression and an impaired sense of self or self-efficacy.

Alfonso Mercado, an assistant professor of psychological science at the University of Texas–Rio Grande Valley, studies the health of migrant families, and has done pro bono work at a 5,000-bed family detention center in Dilley, Tex. When it comes to detained families, he says his research shows a clear connection between the status of parents and their children.

“Many times, the parents’ well-being is a predicting factor of how the child is going to be,” Mercado says. “Those that reported significant trauma symptoms also reported significant physical symptoms, and the same thing happened to their children. When we’re looking at parental attachment, the children are in a critical and sensitive period of their lifespan” — meaning trauma experienced during this phase, from dangerous circumstances in kids’ native countries to the harrowing journey to the U.S. to conditions in detention centers, could have significant effects on their development moving forward.

Shannon Guillot-Wright, a community health research fellow and medical humanities doctoral candidate at the University of Texas Medical Branch, has also studied migration and family detainment, and calls mental health issues and trauma resulting from family detention “the number one issue” associated with migration. For kids, she says, it can potentially lead to increased rates of anxiety, depression and PTSD, as well as heightened risks of suicide and self-harm in the future.

“Some of that could be related to the children seeing their parents under this kind of distress,” Guillot-Wright says, “but I think it’s also related to children themselves being in these prison-like conditions.” Indeed, research has shown that youth incarceration, particularly in adult facilities, may contribute to future mental and behavioral health issues.

Given those risks, Guillot-Wright says authorities should consider non-detention-based practices when dealing with asylum seekers. “Family detention hasn’t always existed as it is now. In the past, it would be as though they were on parole, in a sense,” she says. “It’s not only a more humanitarian way to work with asylum seekers, but it’s actually more economical, because you’re not detaining families in these huge facilities for a long period of time.”

But if laws remain as they are, the experts say authorities should ensure that detention facilities have adequate living conditions and support systems in place. Providing vulnerable children with support — things like counseling services, educational opportunities, Spanish language resources and contact with family members outside the holding facility — is especially important, Lee says.

“This is a very unusual, highly stressful, toxic sort of environment for these children and these families to be raised in,” Lee says. “Some recognition of that to try and offset it in some purposeful, intentional ways…would at least be some good faith, purposeful, informed effort.”

Mercado, the psychologist who works with migrant families, adds that while keeping families together is a crucial first step, authorities must do more to support them as units.

“Family unity is a Latino cultural value. That is what makes Latinos who they are,” Mercado says. “Knowing that, the humane thing to do is to keep the families together, not apart. Keep the families in adequate living conditions, with no fences, no cage-like environment, and provide adequate professional support.” 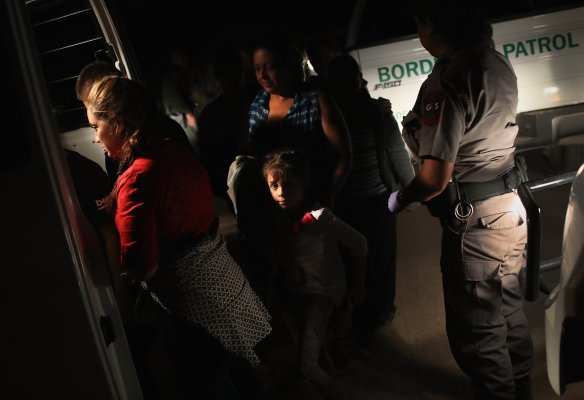 A Reckoning After Trump's Border Separation Policy: What Kind of Country Are We?
Next Up: Editor's Pick