At this point we are beyond the moral indignation. It is ethically wrong to put children in cages, it doesn’t matter where they come from. But I wonder if the end result would have been the same if there were American kids in cages and chain link fences instead of children from Guatemala, El Salvador and Honduras.

It seems that Donald Trump does not believe all children are equal. There is no law that required the president of the United States to separate families, a fact he finally acknowledged as he prepared to change his own policy yet again. A simple phone call could have stopped this child abuse practice that has separated more than 2,300 minors from their parents weeks ago.

The cruelty is unimaginable. The Mexican Foreign Minister, Luis Videgaray, reported that a 10-year-old girl with Down syndrome was separated from her mother for days. But most children at detention centers in the United States are from Central America. I spoke with a mother from El Salvador, Elena Martínez, who hadn’t seen her 11-year-old son for more than a month. She was with an ankle monitor in Houston while his son was kept at a detention center in California. She had no idea when they would see each other again.

So let’s be very clear, this is torture.

Article 1 of the United Nations’ Convention Against Torture defines torture as “any act by which pain or suffering, whether physical or mental, is intentionally inflicted on a person for (…) punishing him for an act he or a third person has committed…” This is precisely what the Trump Administration has done with its “zero-tolerance” policy at the border. They are separating families as a deterrent and punishing kids for the actions taken by their parents. And that’s precisely the definition of torture. (The U.S. signed the Convention against Torture in 1988 and ratified it in 1994.)

The audio released by ProPublica of children crying and calling for their parents is the best evidence we have, so far, of the suffering inflicted by an elected government on minors from other countries. Diplomacy and patience are not an option when children are suffering from life-changing traumas. Pope Francis called it “immoral.” And Andrés Manuel López Obrador, the leftist presidential candidate who is leading the polls in Mexico, described Trump’s new policies as “racists.” (If he wins on July 1, don’t expect another weak and spineless president like Enrique Peña Nieto.)

The Trump Administration is also in violation of Article 9 of the Convention on the Rights of the Child (signed by the U.S. in 1995). The treaty establishes that “a child shall not be separated from his or her parents against their will…” I do understand that families applying for political asylum have to go through a lengthy and complex judicial process. But there is no reason to separate them. They could be kept together, for brief periods, in shelters or be released until their day in court. The problem is that Donald Trump doesn’t want to.

There’s no easy solution to our immigration problems. Since the amnesty of 1986, we haven’t been able to find common ground on how to deal with millions of undocumented foreigners. But to put children in cages is not the answer.

The first step should be to stop the torture of kids. Nations are judged, not by the way they treat the rich and powerful, but how they deal with the most vulnerable. Destroy the cages, reunite all the children with their parents and get ready for a very painful conversation. We need an intervention.

Do we really want to be a country known around the world for torturing children? We require a much more realistic immigration policy. The refugees showing up at our Southern border would rather go through hell — namely, the U.S. immigration system — than risk the rape of their daughters or the possibility of their sons being recruited by gangs like MS-13.

Think about it, what would you do?

Of course, not all of them are fleeing violence and political persecution. For generations, poverty has been a pretty good incentive to go north. And that is not going to change when we have jobs for them in the U.S. and they can make in an hour what they used to earn in a day or two.

To tell you the truth, I don’t think we are going to be able to reach any kind of immigration consensus while Donald Trump is at the White House. The country is too polarized. So Plan B is already under way (and that is to resist until 2020).

But we cannot remain silent when our government is torturing children. Silence, in this case, is complicity. And I want to be able to look my children in the eyes. 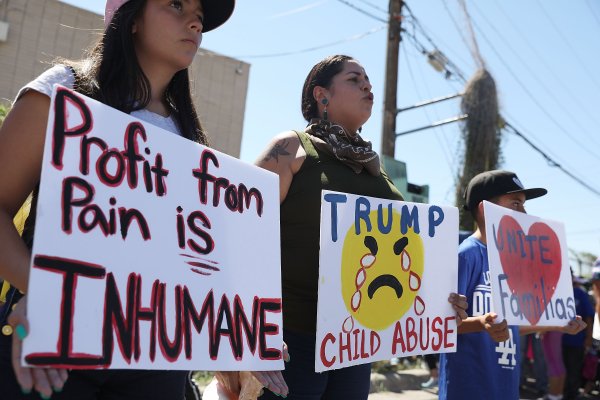 Girl With Down Syndrome Separated from Mother at Border
Next Up: Editor's Pick