What's Happening to the 2,300 Children Already Separated From Their Parents? Here's Everything We Know

President Donald Trump’s executive order on Wednesday ended his Administration’s policy of separating migrant children from their parents at the U.S.-Mexico border — but did not address the 2,300 immigrant children who have been taken from their families since early May.

What will happen to the separated children who are currently in the custody of the Department of Health and Human Services (HHS)? They are currently being held in Customs and Border Protection facilities and Office of Refugee Resettlement shelters all over the country as their parents await prosecution on federal misdemeanor charges.

During a cabinet meeting on Thursday, Trump instructed government agencies “to work together to keep illegal immigrant families together during the immigration process and to reunite these previously separated groups.” But officials still have not laid out a plan for reuniting children and their parents. It’s not clear how long it will take and whether the children will be transferred to family detention facilities with their parents.

The Department of Homeland Security said in a fact sheet released on Saturday that the government knows the location of all of the children separated from their parents, and is working to reunite the families; 522 children have been reunited with their parents, according to DHS, and Port Isabel Service Processing Center in Los Fresnos, Texas has been designated the primary reunification port. There was no estimate in the fact sheet about how long the reunification process would take.

But in the immediate aftermath of Trump’s order, Kenneth Wolfe, a spokesperson for the Administration for Children and Families within HHS, told the New York Times that “there will not be a grandfathering of existing cases,” suggesting that families who are already separated would not immediately be reunited. Another HHS spokesman later said Wolfe misspoke and said “reunification is always the ultimate goal.”

And those responses did not satisfy Democratic lawmakers and immigrant advocates, who have called on the Trump Administration to reunite families as quickly as possible.

“It seems that the administration lacks a plan, intention, and a sense of urgency to begin reuniting these children — many of whom suffered serious emotional anguish — with their parents,” Democratic leaders Sen. Chuck Schumer and Rep. Nancy Pelosi wrote in a letter to Trump on Thursday. “The administration has the authority and the resources to immediately begin the process of family reunification. Any delay in doing so is simply unacceptable.”

Trump’s executive order maintains the Administration’s “zero-tolerance” policy, which mandates the criminal prosecution of any adult caught illegally crossing the border. Under the order, children will now be held in detention with their parents throughout criminal proceedings — something that sparked swift criticism from immigrant advocates, who worry it will lead to families being detained together for “months or years.”

The sudden implementation of the “zero tolerance” policy caused confusion and crowding within a system that was already burdened by a rise in the number of children crossing the U.S. border alone in recent years.

“It’s extremely difficult. We’re already trying to work on some of these cases, and the parent and the child are caught up in this byzantine system, where there is no established means of communication. It’s basically making our lawyers act like private investigators to try and track them down,” said Wendy Young, president of Kids in Need of Defense (KIND), which provides legal defense to children in immigration court. “There doesn’t seem to be any coherence in the Administration’s planning.”

The system for holding migrant children remains opaque, and advocates say it has been difficult to keep track of the children in U.S. custody and find out where their parents are.

Olivares interviews parents quickly before their criminal sentencing hearing at a federal courthouse in McAllen, Texas, writing down as much identifying information as possible and then trying to track down their children. “It’s all-consuming,” Olivares said earlier this week.

“If we don’t document them, there’s no record that these families are in the system,” he said. “It’s very, very likely that many of them will not be able to, on their own, look for their children, especially when they’re detained and even after they’re released — or deported, even worse.” 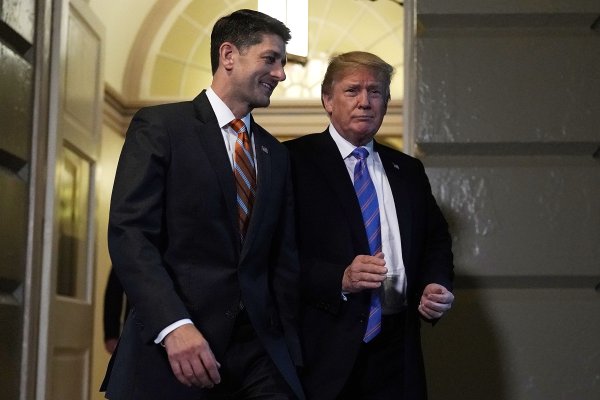 Rough Week for the GOP
Next Up: Editor's Pick