George Takei Slams Family Separation Policy: 'At Least During the Internment, We Remained a Family'

Actor George Takei speaks onstage during 'An Evening with George Takei' at the Long Center on May 4, 2018 in Austin, Texas.
Rick Kern/WireImage
By Katie Reilly

Star Trek actor George Takei, who was detained in a Japanese American internment camp when he was 5 years old, said Tuesday that the Trump Administration’s family separation policy is worse “in one core, horrifying way.”

“At least during the internment of Japanese-Americans, I and other children were not stripped from our parents. We were not pulled screaming from our mothers’ arms. We were not left to change the diapers of younger children by ourselves,” Takei wrote in a column for Foreign Policy. “At least during the internment, we remained a family, and I credit that alone for keeping the scars of our unjust imprisonment from deepening on my soul.”

Nearly 2,000 children were separated from their parents during a six-week period in April and May, as the Trump Administration’s “zero-tolerance” immigration policy took effect. Images of immigrant children — separated from their parents and detained after crossing the U.S.-Mexico border — have sparked comparisons to the internment of Japanese Americans during World War II.

“These images are eerily reminiscent of the internment camps for U.S. citizens and noncitizens of Japanese descent during World War II, now considered to have been one of the most shameful episodes in U.S. history,” former First Lady Laura Bush wrote in a Washington Post column this week, condemning the family separation policy.

The policy generated outrage this week from religious leaders, immigrant rights activists and some Republicans. President Trump has both defended the family separation policy and falsely blamed it on Democrats.

“The internment happened because of fear and hatred, but also because of a failure of political leadership,” Takei wrote in his column. “In 1941, there were few politicians who dared stand up to the internment order. I am hopeful that today there will, should be, must be, far more people who speak up, both among our leaders and the public, and that the future writes the history of our resistance — not, yet again, of our compliance.” 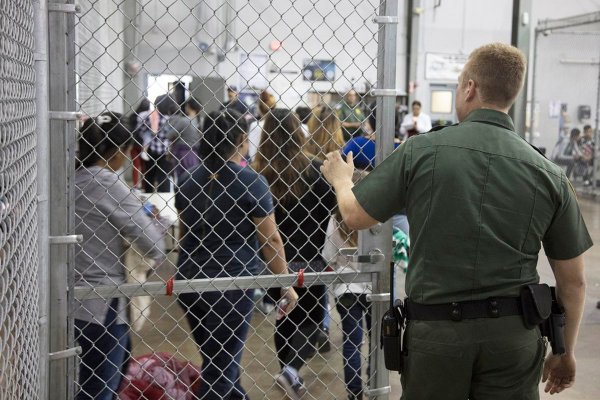 Nonprofit to Be Paid $458 Million to Detain Migrant Children
Next Up: Editor's Pick