The Trump administration plans to pay a Texas nonprofit nearly half a billion dollars this year to care for immigrant children who were detained crossing the U.S. border illegally, according to government data.

The nonprofit, Southwest Key Programs Inc., is to be paid more than $458 million in fiscal 2018, according to the data — the most among the organizations, government agencies and companies that run a detention and care system for immigrant children on behalf of the Department of Health and Human Services. Southwest Key has about a dozen facilities in Texas, including a site at a former WalMart Inc. store in Brownsville that has drawn attention from members of Congress and national news organizations.

President Donald Trump is facing bipartisan criticism for his “zero tolerance” policy toward families that cross the U.S. border with Mexico illegally. Under the policy, all undocumented adults who cross the border are to be arrested and prosecuted, even if they mean to petition for asylum. As a result, their children are removed and placed in the custody of U.S. authorities — briefly with Customs and Border Patrol, under the Department of Homeland Security, and then with the Office of Refugee Resettlement at the Administration for Children and Families, an HHS agency.

The refugee office is housing and caring for nearly 12,000 immigrant children, according to Steve Wagner, ACF’s acting assistant secretary. More than 2,000 of them were separated from their parents or other caregivers after crossing the border, under the Trump policy announced in April; the rest entered the U.S. on their own.

The government already expects to spend $943 million in 2018 in grants to detain and care for the children, according to ACF data — a figure that may increase as the Trump administration apprehends more families crossing the border. The government spent $958 million in all of fiscal 2017, which ended Sept. 30, according to the data.

ACF spokespeople didn’t respond to a voicemail or email inquiring about the data and the government’s detention system. Austin-based Southwest Key also did not respond to messages.

The ACF data aren’t current and may not reflect an expansion of the government’s detention system. For example, two Florida lawmakers — Senator Bill Nelson and Representative Debbie Wasserman Schultz, both Democrats — tried on Tuesday to enter a Homestead, Florida, detention center run by Comprehensive Health Services, Inc. They were turned away by officials at the facility.

“You will hear me erupt like a volcano on the floor of the Senate tonight,” Nelson told reporters afterward.

The company doesn’t appear in grant records for what the government calls its “Unaccompanied Alien Children Program.” Instead, it was issued a contract in February for “emergency shelter” for as many as 500 immigrant children, records show. The contract was increased on May 4 to provide beds for as many as 1,000 children, and will pay the company as much as $31 million.

Comprehensive Health’s Homestead facility had been in operation under Obama but was closed last year. Wasserman Schultz said it was reopened this year without notice.

Gail Hart, a spokeswoman for Comprehensive Health Services, declined to say when the detention center reopened and referred all questions to the Administration for Children and Families.

The former WalMart store in Brownsville that Southwest Key converted into a detention center is owned by a local limited liability corporation, Chacbak LLC, according to property records. The company owns at least one other local building also leased by Southwest Key, a former hospital converted into a detention center for immigrant children in 2013, according to the Brownsville Herald.

Two groups of Democratic members of Congress have recently toured the former WalMart, now called Casa Padre, which houses about 1,500 boys. On Monday, a group of House Democrats also toured Casa Presidente, a smaller Southwest Key facility that houses younger children. The lawmakers said they encountered children younger than one who had been separated from caregivers and housed at the facility for longer than a month.

“If the president had a heart, how could he let this happen?” Representative Ben Ray Lujan said in an interview after the visit. “He should come and see one of these little babies, maybe hold one. Maybe he’ll feel something, maybe it’ll set something right in him.”

Southwest Key rapidly increased the compensation of its CEO, Juan Sanchez, from about $269,000 in 2010 to more than $786,000 in 2015, the most recent year for which its tax returns are available through the website Guidestar.org. His compensation nearly doubled to $1.5 million in 2016, according to tax records for an Austin charter school he founded.

The nonprofit is expanding its operations — the Houston Chronicle reported last week that Southwest Key has leased a warehouse in that city to build a detention center that may be intended for the long-term housing of as many as 240 children, most of them under the age of 12. 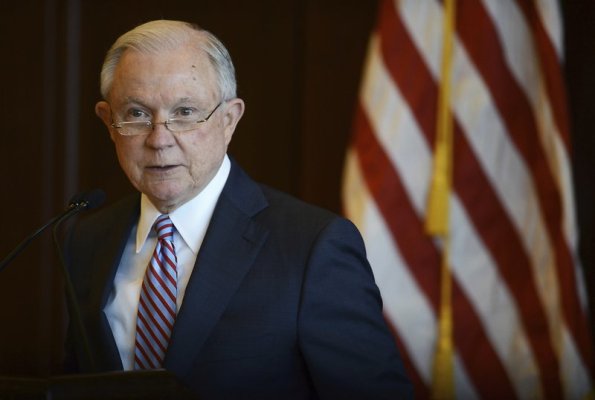 Hundreds of Methodists Seek to Discipline Jeff Sessions Over Family Separations
Next Up: Editor's Pick