Congress scrambled Tuesday to find a way to end a Trump Administration policy that splits young children from their parents along the U.S.-Mexican border and dodge a new demand from the president for a $25 billion border wall.

With many Republican lawmakers up for election this fall, nerves were frayed ahead of a planned Tuesday evening visit by the President, with some regretting the invitation altogether in the midst of an already dicey situation.

Even Senate Majority Leader Mitch McConnell snapped when pressed by reporters for details about plans to end the family separation policy.

“I’ve already addressed this issue,” McConnell said in the grand hallway just off the Senate floor. “We have a problem and we need to fix it. I don’t know how many times y’all want me to hear the same thing.”

Senate Republicans left their standing luncheon Tuesday vowing to find some way around an immigration impasse created, defended and leveraged by Trump. The second-in-command in the Senate, John Cornyn, began collaborating with fellow Texan Sen. Ted Cruz on a plan that could dig the GOP out of a hole on the issue.

At the same time across town, Trump was rejecting a central tenet of Cruz’s plan, doubling the number of immigration judges to more quickly process cases.

“We have to have a real border — not judges,” he told a gathering of small-business owners. “Thousands and thousands of judges they want to hire. Who are these people? … They said, ‘Sir, we’d like to hire about five or six-thousand more judges.’ Five or six-thousand? Now, can you imagine the graft that must take place?”

“We don’t want judges; we want security at the border,” he added.

In the same speech, Trump also blasted the idea of addressing the family separation policy in a limited bill, arguing he’d prefer to deal with it as part of a comprehensive immigration package of the type that has so far been tough to find.

“We have one chance to get it right,” Trump said.

At the Capitol, members of both parties felt as though Trump were holding these children hostage in pursuit of a deal that has eluded Presidents since Ronald Reagan.

And in phone calls and meetings with Senators, Trump keeps coming back to funding for a border wall that he made the centerpiece of his campaign. Trump has told lawmakers that he wants a $25 billion down payment on the project as part of the broader immigration plan and, if he doesn’t get it, he will force a government shutdown on Oct. 1.

Senate Republicans were incensed at the demand, especially since it does little to help children whose photographs and tears have become a public relations disaster for the entire country. Lawmakers tried to strategize a way to talk Trump out of the idea, while those who spoke with him said he was digging in his heels. Reminding him that his own budget chief asked for a smaller sum, $1.6 billion, only made him more determined to get the full amount — despite the fact the Quinnipiac University Poll released Monday shows 58% of Americans oppose a border wall, while two-thirds oppose the family separation policy.

House Republicans, meanwhile, stood by while they waited to hear the latest from the White House about the fate of a compromise immigration bill. White House officials helped craft the measure, which straddled the party’s far-right flank and its centrist membership. But the more the President considers it, the less he likes it because, to his mind, it doesn’t go far enough.

In the same appearance before the small-business crowd, Trump said that Congress needs to change that measure and perhaps expand that tentative deal, again throwing more chaos into an already tense situation on the Hill. Staffers texted the context-free quote, taken from Twitter, around rapidly: “I’m gonna make changes to it.”

For Republicans already facing a divided conference on immigration, Trump’s approach seemed to put compromise even further out of reach. Members of the House and Senate thought they had a basic structure to end children being separated from their parents as they arrived in the United States, but they now say they are at the mercy of Trump’s whims.

“The policy change that took place six weeks ago — it could easily be reversed by the Administration if they choose,” said Republican Sen. Bob Corker of Tennessee, who is retiring at the end of this term amid frustration with the President’s haphazard approach to governing. “We need to act, we need to deal with the entire issue, but this is something they can change. This is something the Administration needs to take leadership on.”

It was moderates versus conservatives in the House Republican caucus. House Leadership felt undercut by the President. The White House felt goodwill at the Capitol fading fast. The Senate effort, led by Cornyn, hoped to piece together something direct and narrow by the end of the week. The House worried the Senate might draft something far too narrow to win the support of its more raucous caucus. Policy, politics and personality all clashed in windowless rooms reeking of stale coffee.

And those battles merely described what was happening inside the Republican Party. Add in the Democrats, who stood unified against the policy — and largely unified against money for building Trump’s wall — and there could be serious roadblocks. Senate Democrats, at least through late Tuesday afternoon, insisted Trump could fix this with a phone call and should not be rewarded for creating the mess.

McConnell, the typically cool and unflappable Senate tactician, showed pique leaving the weekly luncheon. Senators agreed to patch together something limited and without wall funding. This, of course, runs counter to Trump’s new demands that he get his wall or else and could derail the shared goal in Congress to get back to talking about the booming economy.

“My assumption is in order to fix this problem, you can’t fix all the problems,” McConnell told reporters in an unusually testy weekly question-and-answer session. “This requires a solution, and therefore obviously it needs to be a narrow solution to fix the problem at hand.”

The problem for Republicans on the Hill? They weren’t sure which hand the President wanted to use. 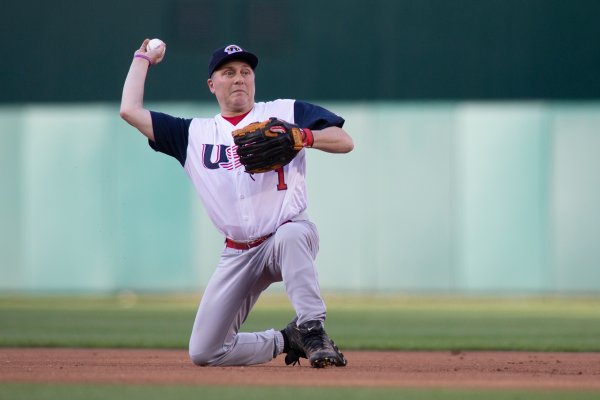 Steve Scalise 'Back in the Game' a Year After Congressional Baseball Shooting
Next Up: Editor's Pick