Leave it to Beyoncé and Jay-Z to redefine what “pulling a Beyoncé” can be. Last Saturday, the pair headlined London Stadium as part of their joint On the Run II Tour, and at the end of their career-spanning set a message flashed on the screens: “ALBUM OUT NOW.” And there it was, on the home screen of the streaming platform Tidal (in which Jay-Z and Beyoncé have a controlling stake): Everything Is Love, credited to The Carters, an exquisitely produced happy ending to the cheating-heart narrative that unspooled on Beyoncé’s gravity-defying 2016 album Lemonade and Jay-Z’s terse yet personal 2017 release 4:44.

Rumors that this power couple would someday release a joint album have long been grist for pop’s mill, with Jay telling The New York Times last year that he and his wife had been using art “almost like a therapy session.” Everything was finished just a few hours before its splashy release, although its meticulous craft suggests otherwise. (“[Beyoncé and Jay-Z] don’t have rules,” producer Andre Lyon, who worked on the album as part of the production duo Cool & Dre, told Rolling Stone. “No one can get away with the things they do—and when I say get away with, I mean pull off.”) The album recalls other blockbuster duets in R&B and hip-hop—particularly Marvin Gaye and Tammi Terrell’s besotted soul sides, as well as Method Man and Mary J. Blige’s hip-hop-minded update of that pair’s 1968 smash “You’re All I Need to Get By”—as it plays with public perceptions of the duo’s relationship. Yet it incorporates too many of-the-moment elements to feel anything but timely: There are ad-libs from the Atlanta rap upstarts Migos, beats that take cues from the minimalist hip-hop subgenre trap, lyrical rebukes to the NFL and the Grammys, and cryptic references to other boldfaced names.

Everything opens with “Summer,” a lush ballad that sounds tailor-made for song-of-the-summer status. It also sets the thematic, if not musical, tone for the rest of the album: Beyoncé and Jay have weathered the storms of previous years and are ready to get back to the drunk-in-love business of beachside fun, shared plans, and knocking the rest of the world on their heels with their individual and combined success.

Over the course of Everything’s nine songs, the duo acknowledge bumps—subpoena-brandishing investigators, streaming services who don’t share the wealth, shady friends—while remaining resilient and focused, both on each other and on their art. Beyoncé’s swagger-filled rapping is as dead-serious as it is delightful: Her half-sung, half-rapped hook on “713” flaunts her mighty pipes and streetwise skills while throwing in some vocal processing that echoes the ’90s G-funk era; her demands for “respeck on my check” on “Apes–t” reframe the wage-gap issue in a radio-ready way; and her admonition of Spotify on the flinty, Pharrell-assisted “Nice” ends with a quote from the 1998 cult flick Half-Baked that’s as unprintable as it is cheer-inducing. Jay’s boasts are also in ample supply as he shouts out sellout crowds and big-ticket brands, although in a continuation of the openness he exhibited on 4:44, he pulls back the curtain on the couple’s origin story on “713” while also noting that life for black men in America is only made easier by black women.

Everything Is Love closes with “Black Effect” and “Lovehappy,” both of which return to the string-laden classic-soul sonics of the album’s opeer. The former examines America’s complex racial politics before making a simple declaration: “The Chitlin’ Circuit is stopped/ Now we in stadiums,” Jay declares, calling back to the path black musicians had to take during the era of racial segregation while flicking at how he and his wife have reached music’s highest echelons not just in their home country, but around the world. “Lovehappy,” a gorgeously plush ballad with sparkling synths and trilling strings, ends things on a hopeful note, the couples’ back-and-forth banter sounding like it was taken from the therapy sessions Jay mentioned (“Love is deeper than your pain and I believe you can change,” Beyoncé growls at one point) before bubbling over into a sighing “happy in love.”

Nearly two decades after their first meeting (the encounter Jay describes in “713” happened in 2000), Beyoncé and Jay-Z have ascended to celebrity’s highest heights by playing it close to the vest. They’re the masters of indulging the gossip-industrial complex’s hunger for “the real story” while also holding on tight to whatever the actual story might be. Everything Is Love’s melding of the personal and the imperial, the old-school and the next-wave, and the soulful and the stubborn give away the real story: Years later, The Carters still inspire each other to push harder and aim higher as they salute their love of each other, and of their art. 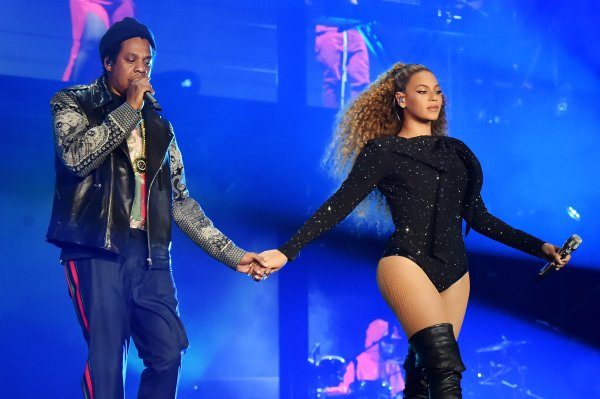 How to Listen to Beyoncé and Jay Z's New Album If You Don't Have Tidal
Next Up: Editor's Pick