Advocates Worry About Girls Held Due to Family Separation Policy

The Trump Administration has released photos of young boys being held at detention centers for undocumented immigrants, but so far it has not released any images of young girls.

That discrepancy has led to Administration critics to start a Twitter hashtag #wherearethegirls. Pressed on the question at a White House briefing Monday, Homeland Security Secretary Kirstjen Nielsen said that children are being cared for in the same way but that she would have to “look into” why no photos have been released.

Migrant rights groups say they are concerned about the risks that girls and young women face in detention, noting issues such as pregnancy, sexual assault, menstruation and psychological trauma from assault and rape they faced in their home countries.

“They’re fleeing pretty horrific circumstances,” said Michelle Brané, the director of the Migrant Rights and Justice program at the Women’s Refugee Commission. “I’ve heard women and young girls tell me about being taken and locked in basements and gang-raped for two weeks at a time until they escape.”

The Office of Refugee Resettlement has historically provided temporary shelter and immediate medical attention for unaccompanied minors who cross the border. Children would then typically be released to the care of family members, or long-term foster care when necessary — 90% of them would have made this move within a month of their arrival, according to Kids in Need of Defense, a group that protects unaccompanied children who enter the immigration system alone.

But migrants rights groups worry that the office is being overwhelmed by the Trump Administration’s new “zero tolerance” policy of referring everyone apprehended crossing the border for criminal prosecution, which has led to more than 2,000 children being separated from parents who are awaiting trial.

The Office of Refugee Resettlement’s policy is to immediately screen girls for histories of sexual trafficking, pregnancy and mental health issues, among other things. Additionally, at-risk girls are supposed to be accommodated with private rooms to undress or use the restroom, when requested. But advocates say it’s not even clear that feminine hygiene products are readily available.

“We’re told that if they’ve asked for sanitary napkins, they would get them — but they would have to ask for them, Brané said. “They aren’t just sitting out there.”

Before Attorney General Jeff Sessions’ announcement of the policy change, unaccompanied minors who had particularly harrowing experiences in their home countries would be placed in specialized facilities where their unique needs could be met, but now, it’s unlikely border control personnel have time to adequately screen all the children for these warning signs, said Megan McKenna, Kids in Need of Defense’s senior director of communications.

It’s not easy for these girls to open up to authority figures, according to McKenna. “Sexual violence is used as a tool in many parts of Central America where the gangs control communities,” she said.

“The conditions would certainly not be conducive to have a child talk about what their needs are,” McKenna continued. “Just the sure fact of being separated from a parent would also make the child less likely to be able to share any of these experiences with anybody, since they are already dealing with the trauma of being separated from a parent and not having the support of that parent.”

The U.S. Department of Health and Human Services — the government agency responsible for overseeing the child detention centers — did not return requests for comment on how the needs of girls are being met, citing a backlog of hundreds of media requests. 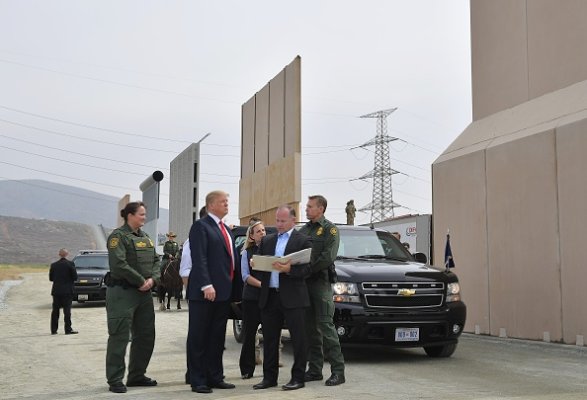 President Trump Is Demanding $25 Billion for a Border Wall Amid Outcry Over Family Separation
Next Up: Editor's Pick