Emmanuel Macron may be France’s youngest ever president, but that doesn’t mean he’s more relaxed about his title. A video of the French president, 40, scolding a teenager who called him by the nickname “Manu” has gone viral, with several social media users criticizing Macron for “humiliating” the boy.

At an event to commemorate General Charles De Gaulle’s call for resistance against the Nazis during World War II, Macron admonished the boy, who appeared to sing a line from the left-wing anthem “The Internationale” before saying “How’s it going Manu?”

“You should call me Mr. President,” Macron told the boy in French.

Macron paused in his round of shaking the hands of people gathered at the Fort Mont-Valérien in western Paris, where more than 1,000 members of the French Resistance were executed by Nazi occupiers of France during WWII. He scolded the boy, saying “No. No, no, no, no, no. You are here at an official ceremony. You should behave properly.” The boy can be heard apologizing, and Macron continued, in reference to the song he was singing: “You can play the fool but today it’s ‘The Marseillaise’ or ‘The Partisans’ Song,'” meaning the French national anthem or the song sung by the French Resistance.

He went on to tell the boy that before he starts a revolution he must learn to “do things the right way… First earn a diploma and learn how to put food on the table.” After Macron’s lecture the boy looked sheepish and responded “Yes sir.” The French president then patted his arm.

While the video got picked up by French media for the scolding, Macron shared the video on his own Twitter feed, telling followers that “Respect is the minimum in the Republic, especially on June 18, especially in the presence of the companions of the liberation. But that doesn’t mean you can’t have a relaxed conversation—watch till the end.” In the longer version, he continues his lecture, telling the teenager that he should work hard on his exams.

People responding to Macron’s own tweet criticized the president for “humiliating” the boy in front of “millions of people” and said he should “respect his citizens.”

It’s not the first time Macron has faced a backlash over his off-the-cuff remarks. In October 2017, opposition party members slammed him for “contempt” when he said workers at an embattled vehicle parts manufacturer should seek jobs at another factory and “stop wreaking havoc.” 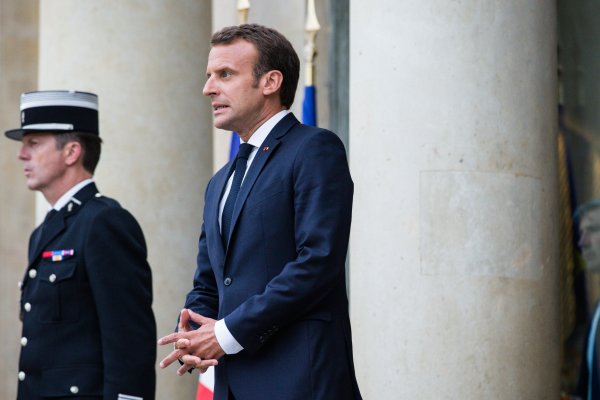 Emmanuel Macron Ordered a Really Fancy Set of China and People Are Angry
Next Up: Editor's Pick