Morgan Suzuki, the PR director of the Four Seasons Hualalai on Hawaii’s Big Island, has been fielding a lot of calls from tourists about the Kilauea volcano lately. They want to know: What are the chances of being hit lava? Can they be suffocated by toxic vog (volcanic smog)?

The Four Seasons is located near the tourist hub of Kailua-Kona – on the opposite side of the island of Hawaii from the volcano.

“Once we assured them the lava wasn’t traveling 100 miles to our resort,” concerned visitors usually calm down and decide to keep their reservations, Suzuki told TIME.

But some prospective visitors still decided to cancel their trips. The area affected by Kilauea’s lava flow encompasses only 9.5 square miles – on an island that’s about the size of Rhode Island and Delaware combined.

Local business owners say that public misconceptions about the volcano’s effects and a basic misunderstanding about the geography of Hawaii is keeping tourists away and hurting businesses even far from the danger zone. Tour operators around the volcano have suffered huge drops in bookings, but even many companies far away in Kailua-Kona told TIME they’re experiencing losses of about 30% for the start of tourist season.

“We all have our homes and properties so I don’t want to compare the two,” Jason Cohn, the Vice President of Sales and Marketing for Hawaii Forest and Trail, which operates nature tours across the Big Island, said. “But from an economic standpoint more damage has been done by misconceptions that have been perpetuated than by the volcano.”

More than 500 homes have been destroyed by the Kilauea eruption – but all of them are clustered in a relatively isolated area around the volcano. Many residents on the other side of the island of Hawaii have said national news headlines have only helped fuel misconceptions about the scale of the damage.

All six local businesses owners and operators interviewed by TIME for this story mentioned a Fox News report that Oahu, a different island more than 225 miles away, was being evacuated because of the eruption.

“It’s just the illusion that we are in a doomsday scenario out here and were not. You know if I watched the news and didn’t anything about geography I would probably cancel my trip to Hawaii too,” Greg VanderLann, the owner of UFO Parasail in Kailua-Kona, said.

Tourism is responsible for nearly 30% of the economy on the island of Hawaii. VanderLann said the drop in tourism from misunderstandings about the volcano has hurt many local residents.

“Jobs are lost and we rely on tourism. That’s the biggest chunk of our industry out here — local families are struggling right now,” he said. VanderLann said bookings at his company have dropped about 35% since the end of May.

Map of distance between Kilauea, Hawaii's most active volcano, and Honolulu.
Google Maps
Fire breaks out at the forest as dozens of structures, including at least nine homes, have been destroyed by scorching lava flows following a massive volcano eruption on Hawaii's Big Island, USA on May 8, 2018. Hawaii's Kilauea volcano erupted Thursday triggering a series of earthquakes that have continued to rattle the island as burning blood-red lava spewed hundreds of feet in the air from cracks in the ground. The strongest earthquakes were felt Friday when a 5.6-magnitude temblor was followed an hour later by a 6.9-magnitude earthquake, according to the U.S. Geological Survey (USGS).
Anadolu Agency—Getty Images

Ross Birch, Director of the Hawaii Visitors Bureau for the Island of Hawaii, said it is still too soon to tell if the Kilauea eruption will do long-term harm to the tourism industry and overall economy. He stressed that the rest of the island is still open for business, and there was no reason to change travel plans.

Already there is a glimmer of hope that tourism operations will be business as usual again. The Norwegian Cruise Lines ship Pride of America began making weekly port stops to the island on June 12 – the first cruise ship to stop at the island since the eruption started in May.

Even Gary Marrow, who operates KapohoKine Adventures – which specializes in tours of Kilauea, as seen improvement. Throughout May and most of June his bookings were down 60%. He is hopeful once Pele, Hawaii’s goddess of volcanoes, finally quiets down, tourists will return in even higher numbers.

“Our island is going to go nuts with tourism because everyone is going to want to come and see mother nature,” Marrow said. “This is how our wold was created, it’s how all of our islands were created and it’s a magical amazing thing to see.” 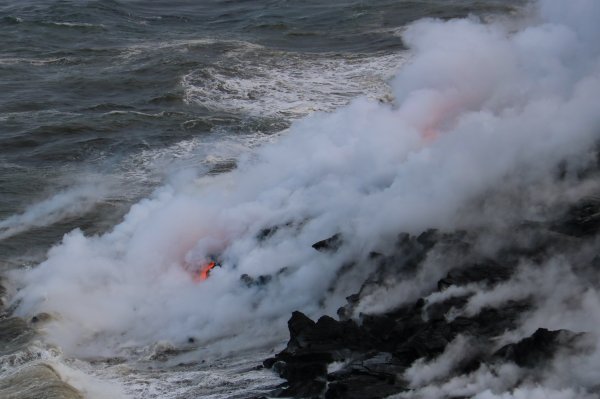 Hawaii's Kilauea Is Still Erupting and Spewing Destructive Lava
Next Up: Editor's Pick