The weekend’s World Cup 2018 game between Mexico and Germany was a nail-biter, with the two rival teams locked at a 1-0 score for nearly their entire match in Moscow’s Luzhniki Stadium on Sunday. But it was that first goal on the board by forward Hirving Lozano — which ended up being the final result of the game, giving Mexico a surprise win against reigning world champs Germany — that created some true moments of excitement for Mexico.

Everyone knows that the word “goal,” said by a passionate sports announcer, has a tendency to get drawn out for effect. Telemundo broadcaster Andres Cantor took that to a whole new level on Sunday, turning the single syllable word into 11 seconds of unending joy, multiple times over. The proof is in audio clips of his narration of the moment when Lozano placed a perfect kick to secure Mexico’s early lead. Going forward in this tournament, other announcers are going to need to step up their game if they want to match Cantor’s clear passion.

Mexico next plays South Korea, while Germany needs to prove themselves against Sweden. 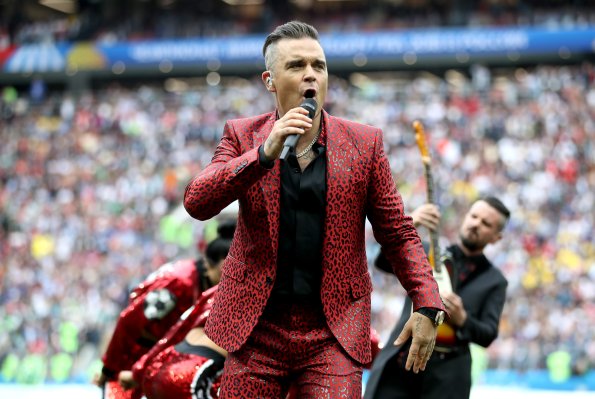 World Cup Performer Robbie Williams Made Quite a Statement
Next Up: Editor's Pick