More Republicans broke ranks with the White House this weekend over the Trump administration’s policy of separating parents who cross into the United States illegally from their children.

The White House has refused to budge on its new “zero tolerance” policy that, by referring all cases of illegal entry into the U.S. for criminal prosecution, splits migrant children from parents taken into custody. The policy resulted in the separation of nearly 2,000 children from their parents at the border in a six-week period from April to the end of May.

Here are the Republicans who have joined Democrats across the board in speaking out against the policy.

The First Lady made a rare statement Sunday criticizing her husband’s administration over the policy.

A spokeswoman said: “Mrs. Trump hates to see children separated from their families and hopes both sides of the aisle can finally come together to achieve successful immigration reform. She believes we need to be a country that follows all laws, but also a country that governs with heart.”

In one of the most strongly-worded statements from a Republican so far, former First Lady Laura Bush called the policy “cruel” and “immoral.”

“I live in a border state,” Bush wrote in The Washington Post on Sunday. “I appreciate the need to enforce and protect our international boundaries, but this zero-tolerance policy is cruel. It is immoral. And it breaks my heart.”

Laura Bush compared the zero-tolerance policy to the internment of Japanese-Americans during World War II, which she called “one of the most shameful episodes in U.S. history.” She added: “People on all sides agree that our immigration system isn’t working, but the injustice of zero tolerance is not the answer.”

Maine Republican Sen. Susan Collins said on CBS’s Face the Nation Sunday that separating children from their parents is “traumatizing” to children and “contrary to our values in this country.”

“What the administration has decided to do is to separate children from their parents to try to send a message that if you cross the border with children, your children are going to be ripped away from you,” she said. “That’s traumatizing to the children who are innocent victims, and it is contrary to our values in this country.”

“From the experience of previous administrations, it does not act as a deterrent to use children in this fashion,” she said.

Anthony Scaramucci, a former advisor to President Trump, said Saturday he believed the policy was not humane and called on Trump to “[fix] this problem.”

House Speaker Paul Ryan came out on Thursday to oppose the policy, but blamed the courts rather than the Trump administration, and urged Congress to fix the problem through legislation.

“We don’t want kids to be separated from their parents,” Ryan told reporters in Washington.

Critics have argued that families are being separated because of the Trump administration’s decision to criminally prosecute all those who enter the U.S. illegally, leaving any children they brought with them as unaccompanied minors.

Trump advisor Kellyanne Conway tried to distance the Trump administration from responsibility over the growing scandal on Sunday.

“Nobody likes seeing babies ripped from their mothers’ arms,” Conway said. “As a mother, as a Catholic, as somebody who has got a conscience … I will tell you that nobody likes this policy.”

But she rejected criticism that the White House was attempting to use the policy as “leverage” to pass an immigration bill in Congress, and disagreed that Trump should reverse the policy. “If the Democrats are serious, they’ll come together again and try to close these loopholes and get real immigration reform,” Conway said.

Trump’s former opponent in the 2016 presidential primary – and Laura Bush’s brother-in-law – called the policy “heartless,” on Twitter, a direct response to President Trump’s assertion on that same medium that “children are being used by some of the worst criminals on earth as a means to enter our country”

“Children shouldn’t be used as a negotiating tool,” Bush responded. “[Trump] should end this heartless policy and Congress should get an immigration deal done that provides for asylum reform, border security and a path to citizenship for Dreamers.” 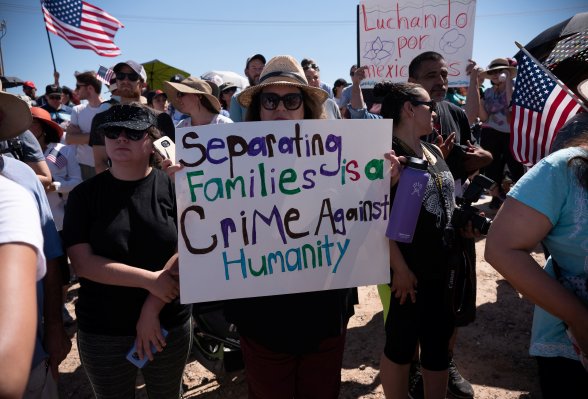