The 5 Biggest Shocks in the World Cup So Far

After four days of games, the FIFA World Cup is already shaping up to be more exciting than many hoped. Some of the biggest teams in the tournament have underperformed, with a handful of shock results that should mix up the rest of the group games.

One of the biggest shocks so far happened on the opening day of the tournament, when the lowest-ranked team in the competition took the top spot in their group with a huge five-goal lead. Opening their home tournament in Moscow, Russia dominated Saudi Arabia, scoring three goals in ordinary time, then almost doubling their lead with two injury time shots.

Russia were the dominant team mainly because Saudi Arabia were a slow and lumbering side, but the start gave the hosts a boost, and much greater potential for getting out of the group with such a huge goal difference. Vladimir Putin will be pleased.

The current World Cup holders went into the tournament among the favorites to win and they were expected to beat inconsistent Mexico in their opening match in the Luzhniki stadium in Moscow. Yet Juan Carlos Osorio’s team was lively and hardworking against Germany, with Hirving Lozano scoring on the counter attack in the 35th minute, and the whole team keeping up a strategy of counter attacking after German chances.

Germany had 26 shots in total but couldn’t manage to put any away — in part thanks to an outstanding performance by Mexican goalkeeper Guillermo Ochoa, who made several vital saves, including in the last minutes. His performance also became the subject of memes shared across social media comparing him to President Donald Trump’s promised border wall.

With a squad of stars — including the most expensive club player in the world, Neymar — Brazil were expected to make relatively light work of their group. Despite Philippe Coutinho scoring one of the goals of the tournament so far, Brazil were held to a tie by Switzerland thanks to Steven Zuber’s goal in the 50th minute.

The match has gone down badly back in Brazil, with some pundits on ESPN saying Neymar should’ve been taken off in the second half for selfish play. Others, including Brazil’s coach, felt the Swiss goal came as a result of a push, and that Neymar had been unfairly fouled by the Swiss team—there were a total of 10 fouls on him in total.

But the result should perhaps not have been a great surprise. Switzerland is ranked as sixth best team in the world, and they lost only one match in their World Cup qualifiers, to Portugal.

A more surprising tie was between Argentina, the two-time champions and 2014 finalists, and Iceland, a team taking part in its first ever World Cup. Though Argentina had 78% of the possession, Iceland defended hard and played a strong game. When Sergio Aguero scored in the 13th minute, it looked as if it could be Argentina’s afternoon, but Iceland responded four minutes later, when Alfreo Finnbogason scored Iceland’s first ever World Cup goal, putting away a poor clearance by goalkeeper Willy Caballero.

5. One of the world’s best players blows a penalty shot

Barcelona superstar Lionel Messi—five times voted the world’s best player—had the opportunity to win the game for Argentina with a penalty with 25 minutes left—but the save by Hannes Halldorsson was one of the other big surprises of the match.

Soccer fans aware of Messi’s penalty-taking record might not have been so shocked. The striker has now missed four of his last seven penalties for Argentina and Barcelona, and two years ago missed a spot kick when the Copa America final went to penalties against Chile. Argentina lost 4-2 on penalties.

But the penalty miss wasn’t the only area where Argentina’s striker underperformed. Messi had a nightmare game in comparison to his major rival Cristiano Ronaldo; where Ronaldo scored a penalty and a late free kick in the 3 – 3 draw with Spain, Messi missed both, failing to make the most of potential set pieces several times during the match. He spoke of his frustration at Iceland’s defensive style, but told reporters that “Obviously it hurts me to have missed the penalty.” 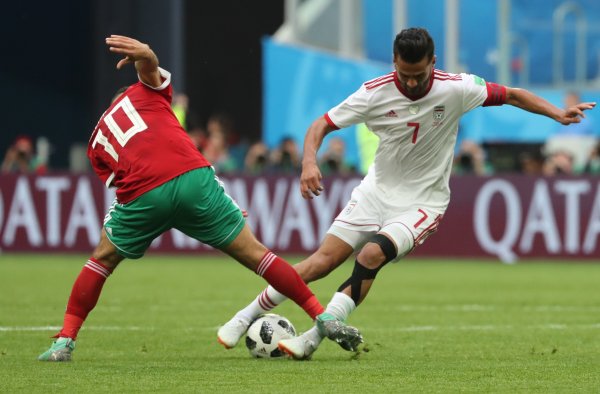