On Father’s Day, hundreds of protesters descended on a Texas border outpost where a new tent city has been erected to detain immigrant children, according to NPR.

The Trump administration announced the new facility would be opening in Tornillo, Texas — just outside of El Paso — last Thursday. By Friday, the center was reportedly operational and already housing dozens of unaccompanied children, some of whom were separated from their parents at the border.

In response to the facility’s sudden appearance, lawmakers called an impromptu march on Sunday amid escalating backlash against the Trump administration’s policy of separating families at the border.

Led by Democratic Rep. Beto O’Rourke and former El Paso County Judge Veronica Escobar, protesters convened at the border crossing from Mexico and marched along a road near the Tornillo facility.

Marco Covarrubias, a U.S. citizen who was born in Mexico and attended the rally with his three-year-old daughter, said he felt morally obliged to take part, according to NPR.

“Before I am an American or anything else I am a dad, and I just couldn’t imagine anyone, let alone the federal government, separating me from my daughter when all I want is just a better shot at life,” he said.

Nearly 2,000 children have been separated from their families between April and May, according to the Department of Homeland Security. Announced in April, the administration’s “zero-tolerance” policy criminally prosecutes adults for undocumented entry, but since U.S. protocol prohibits detaining children with their parents, the practice results in the division of families.

“Ultimately, the reason you have to go to this extreme is because of a failed policy of separating kids,” Republican Rep. Will Hurd told Texas Monthly after touring the Tornillo facility. Journalists have been denied entry.

O’Rourke, who is running for Senate against Ted Cruz, live streamed the march on Facebook. 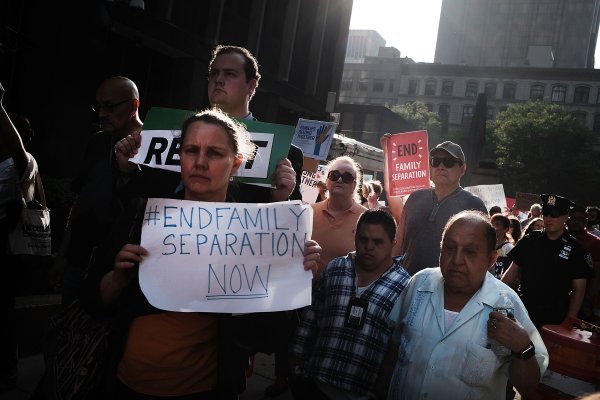 Nearly 2,000 Children Have Been Separated From Their Families During Trump Border Crackdown
Next Up: Editor's Pick