Republican leaders in the House thought they had a deal on immigration. They got sign-off from the White House on a measure that would give hardliners and moderates alike reasons to claim victory, and perhaps put an end to the nettlesome issue that leaves no one in the GOP looking good.

A draft of the compromise made its way around the Capitol on Thursday and lawmakers seemed optimistic Thursday evening as they played an annual charity softball game at Nationals Park. The chief vote-counter planned to start surveying members Friday morning to gauge support.

Then, President Donald Trump paid a visit to Fox News on Friday morning.

On the air, the President signaled he didn’t support the legislation, sending Republican leaders in the House scrambling, their aides cursing and White House staff again trying to discern whether this was a shift for Trump, or if he was pandering to his pals at Fox or if he just didn’t know what he was talking about.

“It’s never a good thing when your best argument is that your boss is an idiot,” one Republican official said. “Yet, that’s all the White House can offer right now.”

Such has been life for House Republicans. Time and again, the President has proven himself an unreliable partner. And the House Republican conference is, quite simply, a mess.

Earlier this week, House Speaker Paul Ryan told reporters and colleagues that the President was on board for a middle-of-the-road immigration bill that provides a pathway to citizenship for young immigrants in the United States illegally while limiting the number of new immigrants who can come legally. The Speaker, who plans to leave Congress at the end of this term, fought vigorously to find a compromise that allowed him to avoid an insurrection from his right flank.

“The last thing we want to do is have some kind of an exercise in futility,” Ryan said Thursday, noting that he was giving the hardliners their vote, which was likely to fail, and then offering the compromise measure.

A day later, Trump once against undercut the Speaker and his team.

“I’m looking at both of them,” Trump told Fox News from the North Lawn of the White House. “I certainly wouldn’t sign the more moderate one.”

A translation: the “more moderate” one was the bill he signed off on in the call with Ryan.

Instantly, phones started screaming in the second-floor West Wing offices tasked with working with Congress. This, lawmakers said, was not the plan. White House Legislative Affairs Director Marc Short, who is soon leaving the Administration, had no answers to give. He told frantic callers to watch the president’s Twitter account.

Ryan allies felt particularly cut by this latest about-face from Trump. They had been working against fierce headwinds from conservatives to give the President his wish list, including money for a border wall and tougher criteria for those seeking asylum. Even so, Ryan was careful to tell reporters that “we won’t guarantee passage” and things could still fall apart.

That seemed prescient. Within hours of the moderate plan making its way through Capitol hallways, the conservative Heritage Action for America started calling it “amnesty” and demanding lawmakers reject it. Democrats appeared unified against the plan, calling it harsh and draconian. The White House seemed ambivalent about the compromise plan, which Administration officials had helped to shape. Despite that warning sign, many Hill officials hoped that indifference would pass.

Then, the President reversed what he had told the Speaker in one of their frequent telephone calls. Officials at both ends of Pennsylvania Avenue seemed baffled by the needless slight. Ryan has been holding at bay a rebellion by promising a vote on immigration, assuming the White House would give him and moderates some degree of cover.

One outside White House adviser said Tuesday night’s primary results from South Carolina helped to shape the President’s thinking on the topic. In South Carolina, incumbent Rep. Mark Sanford lost his primary to a vocally pro-Trump candidate. Sanford had been a critic of the President, and Trump sent a last-minute tweet urging his supporters to boot Sanford. This White House adviser said the results encouraged the President to stay true to his harsh position and suggested his supporters demanded the hardline approach.

Signs of this could be seen in one Wednesday tweet from Republican National Committee Chairwoman Ronna Romney McDaniel: “Anyone that does not embrace the @realDonaldTrump agenda of making America great again will be making a mistake.”

The same White House official said many around the President, including senior policy adviser Stephen Miller, who favors lower immigration, were still holding out hope that the House would prevail on the hardline offer written by Rep. Bob Goodlatte of Virginia.

Some legislators, especially conservatives, privately hoped that the President would tank the moderate option and force the Republicans to vote for the Goodlatte proposal. That seemed unlikely, but a year-and-a-half into this Administration, there’s little telling how much power a last-minute reversal from the President brings.

So as lawmakers shuffled onto the House floor on Friday morning, no one really knew what was going on. Whip Steve Scalise, the No. 3 in House Leadership, had planned on using an unrelated vote on opioids to start counting votes for and against the pair of immigration proposals. That plan was shelved, in part it made no sense to ask the question with the White House adding great uncertainty to the mix.

“We’re waiting on a clarifying tweet,” a second Republican official said. “Yes. Our legislative agenda depends on a tweet. And you wonder why our approval ratings are garbage.”

That tweet came a little after 1 p.m., demanding provisions that are included in the compromise bill. (The President’s demand to end what he calls “Catch and Release” is actually a question of policy that Trump could end without changes in the law.)

The President, however, stopped short of endorsing — or rejecting — specific proposals. Which meant, yet again, officials at the Capitol were still unsure where, exactly, the President wanted them to march.

Then, a little after 5 p.m. on Friday evening, a White House spokesman tried to reverse what Trump had said. “The President fully supports both the Goodlatte bill and the House leadership bill,” deputy press secretary Raj Shah said in a statement, suggesting a parliamentary trick was the object of his dismissal. “In this morning’s interview, he was commenting on the discharge petition in the House, and not the new package. He would sign either the Goodlatte or the leadership bills.”

It’s entirely reasonable if Congress doesn’t take this as the President’s final word. 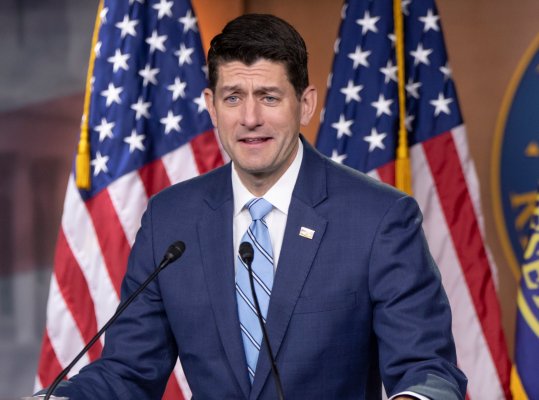 Republicans Decry Border Separation of Children and Parents
Next Up: Editor's Pick