In a surprise interview with “Fox and Friends” on Friday, President Donald Trump announced live that he wants his people to “sit up at attention” when he speaks — the same way North Koreans do for dictator Kim Jong Un.

Around 8 a.m. on Friday, Trump tweeted that the morning talk show was on the White House front lawn. “Maybe I’ll have to take an unannounced trip down to see them?” he said.

About half an hour later, Fox News notified reporters that Trump was about to appear on the show. As correspondents from other networks gathered, Trump could be seen walking up the White House driveway.

“You are about to see something on the Fox News that has never happened, we believe, in the history of White House reporting,” reporter Steve Doocy said live on air. “And that is the president of the United States is just outside the press room and it looks like he is en route to our location.”

What followed was a 30-minute one-on-one interview with Doocy. For the last 20 minutes, Trump took questions from the general crowd of White House reporters.

During the interview, the subject of Trump’s recent Singapore summit with North Korean dictator Kim Jong Un arose. “He’s the head of a country. And I mean, he is the strong head,” Trump remarked. “Don’t let anyone think anything different. He speaks and his people sit up at attention. I want my people to do the same.”

These comments come in the context of criticism that has been lodged at Trump for his lenient descriptions of the dictator. On an interview with Fox News earlier this week, the president downplayed Kim’s human rights violations. After Fox News host Bret Baier called Kim Jong Un a “killer” who is “clearly executing people,” Trump responded that “he’s a tough guy.”

Trump was also censured for returning the salute of a North Korean general, a sign of respect, in a video recently released by the North Korean government. Retired Navy Rear Adm. John Kirby called the gesture “striking” and “inappropriate from a protocol perspective.”

A recent story by the Washington Post reported that, at one point, while watching state-run North Korean television, Trump praised how positive the female North Korean news anchor was toward Kim. “He joked that even the administration-friendly Fox News was not as lavish in its praise as the state TV anchor,” the article states. 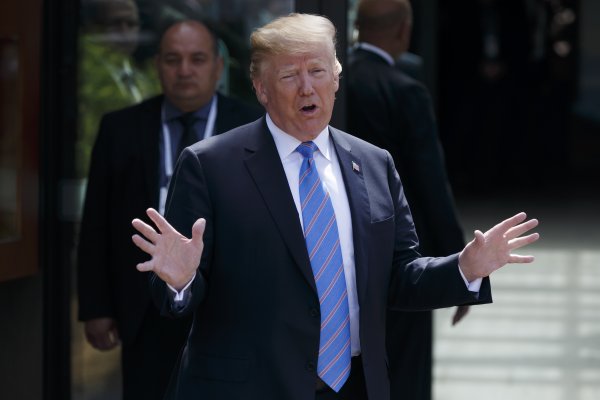 President Trump Says He Can Pardon Himself. Most Voters Disagree
Next Up: Editor's Pick