As monsoon rains bare down on sprawling Rohingya camps in Bangladesh, the U.N. warns that some 200,000 refugees sheltering on the swampland are at risk from landslides and flooding. Half of those threatened by the rising waters and requiring relocation are children.

The first rain of the season poured over the Cox’s Bazar camps and informal settlements last week, inundating most roads. One child reportedly died in a landslide, according to a statement from the U.N. Children’s Fund (UNICEF).

UNICEF estimates 900 shelters and 200 latrines were either damaged or destroyed.

That toll is only expected to grow as the next few months of torrential rains and high winds lash into the tent city, which is precariously perched on landslide-prone hills denuded of trees or in flood-prone lowlands. After peak monsoon season subsides in August, cyclone season begins.

Over 700,000 Muslim Rohingya have sought refuge in Bangladesh after the Myanmar military retaliated against alleged insurgent attacks last August, in an operation a U.N. rights investigator described as having “all the hallmarks of genocide.” These refugees joined 213,000 others who arrived in earlier waves of displacement.

Already uprooted and traumatized, the families are now “defenseless against the elements,” according to UNICEF.

“Thousands of children and their families are living in shelters on hilly areas with no trees, rocks or shrubs to hold sandy ground — much of which has now turned into mud — as the rains continue and the water table rises rapidly,” said Edouard Beigbeder, UNICEF representative in Bangladesh. “It’s vital that refugees in the most vulnerable locations are able to move to safer locations, but many families – who have already faced upheavals several times over the last few months – are reluctant to abandon their makeshift homes.”

In addition to the dangers of landslides and flash flooding, monsoon season also brings the risks of waterborne diseases, such as cholera and diarrhea.

To mitigate the damage caused to shelters built of little more than bamboo, UNICEF said it is working to shore up supplies of corrugated iron paneling and tarpaulins. 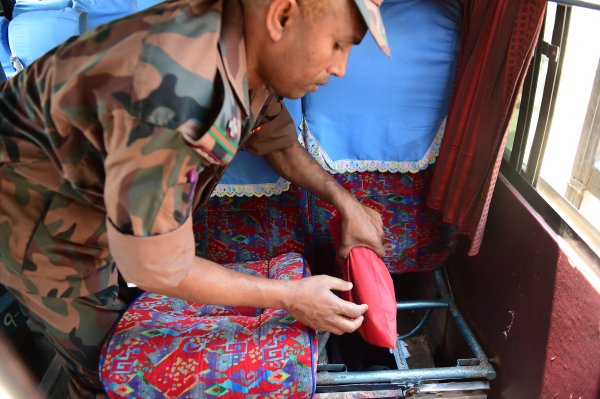 Bangladesh Launches a Deadly Narcotics Crackdown
Next Up: Editor's Pick