It’s a balmy Saturday morning and central Shanghai is swamped by joggers in bright face paint and rainbow athletics socks. After a brief stretching session, which does little to quell the roiling gossip, the several dozen participants set off on a three-mile fun run to kick off this year’s Shanghai Pride festival.

“It’s always important to support Pride and the gay community,” said participant Will, a marketing executive from Taiwan. “And it’s a lot of fun.”

This is the 10th year that China’s largest city has marked the annual Pride celebration of LGTBQ identity. The theme for 2018 is “our community, our identity, our pride,” and features more than 40 individual events, including a Pink Brunch, sexual harassment awareness panel, trivia night, film festival and much more.

Historically, China has had a fitful relationship with homosexuality. Ancient Chinese annals celebrated same-sex relationships, and emperors frequently had homosexual dalliances, though a prudish mentality took root amid Westernization efforts of the late Qing Dynasty.

Read More: This Man Was Sectioned in China for Being Gay. Now He’s Fighting Back.

Homosexuality was only officially decriminalized in 1997 and remained a “mental illness” until 2001. Same-sex marriage remains illegal and there are no laws against discrimination based on sexual orientation. Many in the older generation still consider homosexuality a foreign, corrupting concept.

When Mao Mao came out as gay, her family was initially supportive. “But in order to protect me, they don’t want me to reveal my homosexuality in public,” says the 37-year-old engineer. “And even though my girlfriend’s mom acknowledged our relationship, she told us very clearly [that] we shouldn’t talk about it in front of people she knows.”

Gay content is still routinely censored on mainstream Chinese media. In April, China’s largest social media platform Sina Weibo was forced to apologize after it purged LGTBQ content, sparking an almighty backlash. The autocratic Chinese government is also chary of any display of mass mobilization, even benign ones like Pride.

It’s a problem for Brian Song, who helped to organize Shanghai Pride’s The Journey of Light choir concert that brings together seven LGBT-friendly choirs from across China for a festival of English and Chinese songs.

“We were a little bit worried that maybe our concert would get canceled because of the current environment regarding LGBT in the media,” he says. “We’re not really free to publicize our community right now.”

But attitudes are slowly changing, especially in the big cities. Although “gay clubs” are comparatively few, “gay nights” are very common. Shanghai Pride was always known as China’s only annual LGBTQ festival, but organizers this year have encouraged similar events across the world’s most populous nation under the umbrella of Pride.

“There is more and more awareness right now, which is good, so I think people will get more accepting of what we do, who we are,” says Garbo Huang from Hong Kong, who’s lived in Shanghai for seven years. “We’ll just keep on marching forward.”

—With reporting and video by Zhang Chi/Shanghai 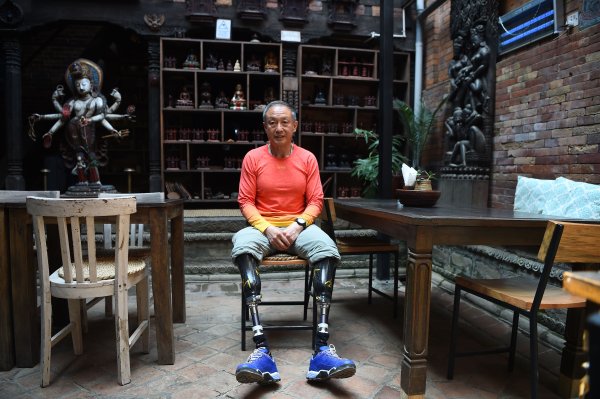