World Cup Performer Robbie Williams Made Quite an Eyebrow-Raising Statement

Singer Robbie Williams performs in the opening ceremony prior to the 2018 FIFA World Cup Russia Group A match between Russia and Saudi Arabia at Luzhniki Stadium on June 14, 2018 in Moscow, Russia.
Lars Baron - FIFA—FIFA via Getty Images
By Raisa Bruner

It’s been a minute since English singer Robbie Williams, a member of former boy band Take That in its ’90s heyday, has graced a globally-televised stage. At Thursday’s 2018 World Cup opening ceremony at the Luzhniki Stadium in Moscow, Russia, however, the performer got to do just that. And he used his moment in the spotlight to grace audiences with a number of his classic hits — as well as to flip the bird at the cameras during his show.

Although the controversial moment was not televised on the ITV broadcast to British viewers, others watching — and all of Twitter, once the clip was picked up and circulated — certainly did catch his hand gesture. While some found his surprise use of the middle finger disrespectful to everyone watching, others applauded Williams’s rebellious attitude on one of the world’s biggest stages.

Williams was joined for the throwback pop performance by Russian singer Aida Garifullina and a bevy of sequin-costumed dancers. After they concluded their show, the Saudi Arabia and Russian teams kicked off the first match of the Cup, with Russia handily winning 5-0 as Crown Prince Mohammed bin Salman and President Vladimir Putin watched from the stands. 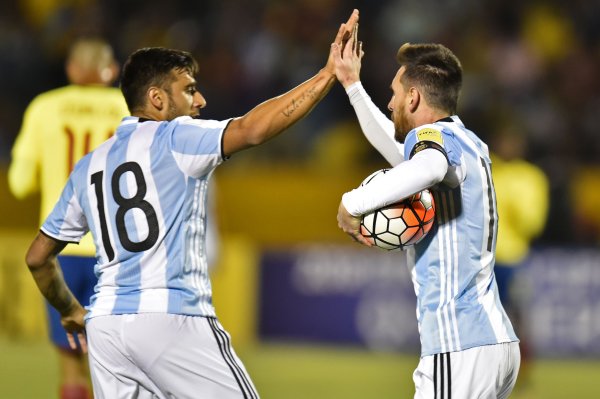 Argentina Takes Back Its Advice on Flirting with Russians
Next Up: Editor's Pick