‘It’s a Sea Change’ for Democratic Women in the Primaries

Like a lot of liberal women, Katie Porter didn’t like what she was seeing in Washington. So the Southern California law professor decided to run for Congress to do something about it. In April 2017, the Democrat announced that she would challenge Republican incumbent Mimi Walters, who represents the 45th District in historically conservative Orange County.

Porter, 44, is a consumer-protection attorney who co-authored a book with Senator Elizabeth Warren. But just a few days after she launched her campaign, a younger male colleague at the same law school-whom Porter helped land his job-got in the race too. He warned that she was too liberal to win. The California Democratic Party endorsed him over her.

On June 5, Porter won the primary anyway, and in November, she’ll be on the midterm ballot in a district that Hillary Clinton won by 5 points. “People here are fired up,” Porter tells TIME. “If we want to stand up to Trump’s agenda, we need a Congresswoman who represents our values.”

Her victory highlights a dominant theme of this year’s primary season. After running for office in record numbers, women are now winning Democratic nominations at a record rate. In Democratic primaries that have featured at least one woman and one man but no incumbent, women have won the most votes 71% of the time, according to Dave Wasserman, an analyst for the Cook Political Report, a Washington-based newsletter. The situation is different on the Republican side, where women have won 35% of those scenarios. In Democratic primaries, Wasserman has calculated a “gender bonus” of 15% for female candidates.

On June 5, the biggest primary day of the year, 42 of the 48 candidates endorsed by Emily’s List, which supports pro-choice Democratic women, prevailed in races up and down the ballot in eight states, from governor to state legislature. Overall, 104 of the group’s 123 primary candidates have triumphed this year, well above its usual success rate in what are often heated intraparty contests. Far more than any ideological trend, Wasserman wrote, “the drive to elect women is defining 2018’s Democratic primaries.”

The trend shows no signs of abating. On June 12, women dominated Democratic congressional primaries in Virginia, while Maine attorney general Janet Mills led narrowly in the state’s Democratic gubernatorial primary, which was too close to call. “It’s exhilarating,” Mills, who would be the state’s first female governor, says of being part of this prospective vanguard.

The result is that women, many of them new to politics, will be the face of the Democratic Party in the first national election of the Trump era. That wasn’t necessarily the party’s plan. Many successful female candidates have, like Porter, needed to overcome the Democratic establishment to win their primaries. In California, the state’s Democratic Party did not endorse a female challenger for the 10 Republican-held House seats the party is targeting in the state.

Why are all these women winning in spite of such obstacles? One reason is that other women are campaigning, organizing and voting for them. The inchoate rage of the 2017 Women’s March has been channeled into thousands of activist cells across the country. Women dominate the so-called resistance groups, like Indivisible, that have sprung up all over the U.S. These organizations, in turn, have been relentless in staging protests and fundraisers and canvassing for local causes and candidates. “Indivisible and the resistance and the #MeToo movements,” Mills says, “have brought these issues to the fore.”

Democratic strategists hope this crop of fresh-faced women will give the party an advantage in November, primarily by providing a contrast to President Trump. Female candidates, they say, will appeal to voters looking for change and be natural messengers for issues, such as health care and education, on which polls show female candidates tend to be more trusted. “With so many women running this cycle, especially Democrats, I am confident that any ‘blue wave’ will wear lipstick and high heels,” Democratic strategist and former national party chair Donna Brazile tells TIME.

It’s too early to say whether this bet will pay off. But if it does and Democrats rack up big electoral gains, 2018 could be a truly historic year for women in politics. Currently, women account for just 107 of the 535 members of the House and Senate, or 20%. Advocates say an influx would help balance policy debates routinely dominated by white males. As Madeleine Dean, who won a congressional primary in Pennsylvania in May, put it at a forum, “We are in this pickle because we have too many of the same type of person representing a diverse population.”

The national nerve center for this year’s groundswell is the downtown-D.C. headquarters of Emily’s List, which has raised more than $500 million over three decades to help bridge the gender gap in Democratic politics. “We’ve been practicing 33 years for this moment,” says the group’s president, Stephanie Schriock, sitting in her spacious office decorated with campaign memorabilia. This year, the group has “bundled” $6.5 million from individual donors on behalf of candidates, and its independent-expenditure arm has spent $12.2 million.

While the number of women in politics has grown steadily over time, parity remains distant not because voters dislike female candidates–they tend to win elections at the same rates as men, according to political scientists–but because not enough women ran in the first place. That’s what the 2016 presidential outcome changed. The floodgates opened after Election Day, and the Women’s March accelerated the trend. Since then, Emily’s List has heard from more than 36,000 women interested in running for office, compared with less than 1,000 over the previous two years. The number of women from both parties running for the House, Senate and governor this year is a record high, according to the Center for American Women and Politics at Rutgers University. “This is all coming out of a moment of realization that elections have consequences and women can’t afford to leave politics to someone else,” says the center’s director, Debbie Walsh. But it’s the Democrats who have been the success story: only 20% of nonincumbent Republican women have won primaries, lower than the rate for GOP men, according to Walsh.

Organizations like the DCCC tend to prefer candidates with political experience–which may incline them against rookies like McGrath–or those who are independently wealthy, a group dominated by businessmen. Schriock argues that first-time female candidates can gain an edge this year by positioning themselves as outsiders with real-world knowledge who can shake up Washington. Some female candidates say it’s unfair that the political experience they’ve worked to build gets called a negative. “Now, men say, ‘Well, you have a great résumé, but you’re kind of an insider,'” Mills, the Maine gubernatorial candidate, told a campaign rally. “Really? For decades, men were telling women, ‘Just a little more experience and you’ll be qualified.’ Well, goddamn it, I am qualified!” (Her opponent was a businessman billing himself as an outsider.)

For women running against the establishment, which in many places can resemble an old boys’ club, Emily’s List can serve as a counterweight. The group sent staff and funding to candidates it deemed competitive, helping tip the scales in some races. In New Mexico, for example, the group funded advertisements on behalf of two female congressional candidates in order to counteract other national groups, With Honor and No Labels, which were supporting a male candidate. It was an unusual move not to pick one candidate and back only her, but it helped boost Deb Haaland, a community activist who would be the first Native American woman in Congress, to a primary win in the state’s First District. “Having a historic number of women run in primaries was not the endgame,” Schriock says. “They’ve got to get on the general election ballot to make a difference. That’s where we come in.”

Part of this success, of course, is driven by the President. Backlash against Trump is the defining dynamic in the Democratic Party, and a Democratic woman qualifies as the anti-Trump. In an NBC News and Wall Street Journal poll released in early June, 48% of voters nationally said they’re inclined to vote for a candidate who promises to be a check on the President, vs. 23% who said they’d be less likely to. The feeling is especially intense among college-educated women: 72% disapprove of Trump, according to NBC and the Wall Street Journal, while just 27% support him.

There’s no guarantee that these women will be the face of a Democratic wave. Halfway through the 2018 primaries, the party’s prospects remain somewhat uncertain. The economy is going strong, and the proportion of voters who say they want Democrats to control Congress has narrowed in some national polls. Many of the women who’ve gotten through primaries still face uphill battles in November in Republican-leaning states and districts, where the qualities that endeared them to a Democratic primary electorate might not translate.

Hillary Clinton and many of her allies called persistent sexism part of the explanation for her 2016 defeat. Some Democratic strategists wondered if it wasn’t too risky to run women at the top of the ticket, but Schriock insists Democratic voters haven’t been blindly picking the woman’s name on the ballot. “These women candidates are putting together a case that voters are hearing and supporting,” she says. There are plenty of states yet to hold primaries, which continue into September. But so far, the clear-cut trend is not for Bernie Sanders–style liberals or safe centrists. It’s been women.

Just don’t call it their year. “Year of the Woman” was the celebratory label coined to describe 1992, when the number of women in Congress doubled–and then inched upward for the next quarter-century. Schriock insists that dispiriting history will not be repeated in 2018. “I don’t think this is a moment,” she says. “It’s a sea change.”

Over the First Hurdle

Seventy-three Democratic women have been nominated for House seats so far in 2018, including these eight

At 29, the state rep wants to become the youngest woman ever elected to Congress.

The former Air Force officer would be the first lesbian, Iraq War vet and Filipina to represent Texas in Congress.

A viral campaign video helped launch the former fighter pilot and mother of three to a primary victory.

The city solicitor beat five other Democrats in a primary for the newly drawn Seventh district.

The former Navy helicopter pilot is gunning for a seat being vacated by a retiring Republican.

A nonprofit exec running on single-payer health care, she topped the party’s preferred candidate in the primary.

The state rep beat a former Congressman in the primary for a Democratic-leaning seat.

A primary winner in a blue district, the community activist will likely become the first Native American woman in Congress. 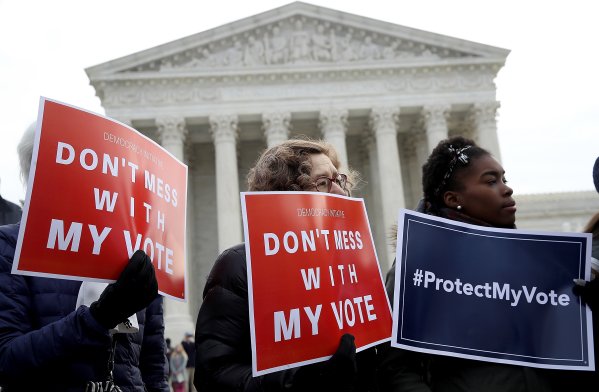 What Does the Supreme Court’s Ohio Decision Mean for Voting Rights?
Next Up: Editor's Pick