How Incredibles 2 Shows What It Means to Be Human

The key to the wonders of Brad Bird’s indisputably wonderful Pixar features–first The Incredibles, then Ratatouille and now the bold, rapturously entertaining Incredibles 2–is that he writes for cartoon characters as if they were human actors. Everything those characters do, every split-second decision they make–even a misguided one–feels lived in, not drawn in. In Incredibles 2, when superhero dad Bob Parr, a.k.a. Mr. Incredible (voiced by Craig T. Nelson), is forced to stay home with the kids while his wife Helen, a.k.a. Elastigirl (Holly Hunter), enters the workforce to bring home the much-needed bacon, the five-o’clock shadow gracing his he-man lantern jaw is a kind of cartoon shorthand for exhaustion. But the weariness in his carriage–the way his big-‘n’-tall physique seems deflated from within, imprisoned by plain old dad cotton when it belongs in superhero Spandex–qualifies as Method-style brilliance.

Of course Mr. Incredible is tired: he’s been chasing after wild-man baby Jack-Jack (Eli Fucile) all day and night, in addition to keeping the older kids (Sarah Vowell’s wildflower-shy and sometimes invisible Violet, and Huck Milner’s ball of energy Dash) on track. In the modern world, dads and moms often strive to shoulder parenting burdens equally. Being more powerful than a locomotive is easier than that.

The Incredibles was a great animated film about true democracy, kind of a Howard Hawks–style reverie about what people can achieve when they preserve their individuality and work together. Incredibles 2 goes even deeper, delving into the fragility of the male ego in a world where women are asserting themselves more every day. It’s also surprisingly scary in places, riffing on the fear that those we love best could someday become strangers who don’t even recognize us. The plot is worked out beautifully: superheroes are still illegal, as they were in the first movie. But they’re the world’s best hope against a new threat, a faceless villain called the Screenslaver. His plan is to control behavior through the things that already rule our lives.

If Incredibles 2 harbors a current of seriousness, what really makes it work is that it is so purely delightful. Nearly all the familiar faces have returned, including Lucius Best, a.k.a. Frozone (Samuel L. Jackson), supercool both in and out of his superhero togs, and the imperious Diana Vreeland of the cartoon world Edna Mode (voiced by Bird himself), who proves that great style can also be functional. (It’s she who invents the most practical onesie for out-of-control baby Jack-Jack.)

But even in the midst of its many boundless pleasures, Incredibles 2 charges us with a mission that’s not for the faint of heart: to choose to look at one another instead of being fixated on the screens all around us. It’s the only way to be alive and awake to every moment. Sometimes it takes a cartoon to show us what it really takes to be human. 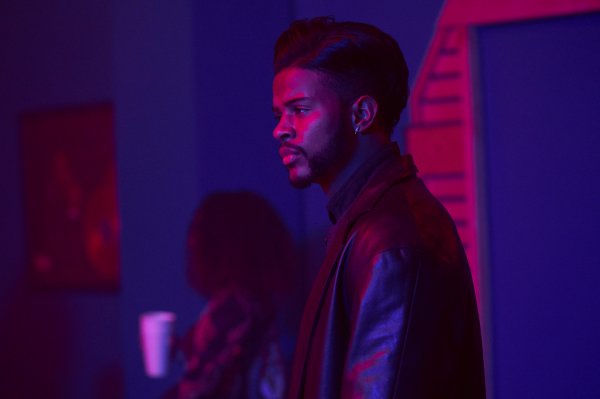 Review: A New Superfly Gets By on Surface Pleasures—and Great Hair
Next Up: Editor's Pick