Review: A New Superfly Gets By on Surface Pleasures—and Great Hair

If you need proof that 2018 movies feature much less sex, drug use and overall loose morals than pictures made nearly 50 years ago, have a look at both the gritty 1972 Super Fly and its spiffed-up, affably glam new version. The 1972 Super Fly, cheaply made, unapologetically disreputable and brazenly cathartic, is one big coke-snort-a-go-go; barely a scene goes by without someone taking a hit. In the Superfly of 2018, you never see anyone actually using, or even, apparently, under the influence: There’s not a jittery addict in sight, and selling the stuff appears to be a victimless crime, an activity that endangers only the people enmeshed in the business—it’s no worse than selling Herbalife. In 1972 you got an extended sexy, soapy bathtub lovemaking scene, complete with some rather elegantly filmed female nudity (Sheila Frazier is the actor, playing opposite the movie’s star, Ron O’Neal). The 2018 Superfly also features a sex scene, this time in a shower, and a threesome to boot. It’s enjoyable in all its ridiculous, discreetly orchestrated glory. Considering how few current mainstream movies even attempt sex scenes, let’s consider it progress.

The new Superfly—made by the Canadian-born music-video Director X, who, in a previous and presumably much less fabulous life, used to go by the name Julien Christian Lutz—is sometimes silly and sometimes not silly enough, and its rhythms tend to be a little stiff. But there’s something going on here, even if it’s just a chance to revel in surface style. And the movie finishes with a violent act of political defiance that feels righteous, not gratuitous: It’s the one scene that comes anywhere close to opening the same type of societal pressure valve its predecessor did. The new Superfly isn’t a great work of artistry or of cheap thrills—it’s so in between it’s practically bourgeois—but in the swagger department, it just squeaks by.

Trevor Jackson (of Eureka and Grown-ish) stars as Priest, a mega-successful Atlanta drug dealer who runs his business as if it were a benevolent Seattle startup of the ’90s, throwing appreciation parties for his many employees and expressing dismay when he learns that his right-hand man, Eddie (the superb Jason Mitchell) has, in an effort to keep peace, ordered a hit targeting a rival coke-dealing gang, the Snow Patrol. (Its members dress in spotless white tracksuits, accented by luxurious toppers of fur and leather; their clubhouse is a comically lavish Scarface-style compound.) Priest has a smart, gorgeous girlfriend, Georgia (Lex Scott Davis), and a special employee who helps him run the operation from his Architectural Digest-worthy loft, Andrea Londo’s Cynthia. Together, the three keep the gears going at headquarters, and take the occasional shower together (see above).

And yet Priest’s business style is somehow so low-key and groovy that law enforcement has no clue it even exists. Eventually, two crooked cops, at least one of whom is a raging racist, get wise. (They’re played by Brian Durkin and Jennifer Morrison.) The plot of this Superfly, like that of the earlier iteration, involves that one last score, the big money cleanup that will allow Priest to retire and live as an honest man. Not that he isn’t honest now: Though he stands his ground when challenged by true baddies (like Snow Patrol hothead Juju, played by Kalaan Walker), his civic-mindedness is clear: When a young woman bystander is wounded by a bullet meant for him, he presses a wad of dough into her friend’s hand, practically giving her directions to the nearest, most solid-gold ER. He may be a drug kingpin with a neck tattoo, but deep down, he’s the municipal mensch.

You can also count on a violent shootout or two, a classic hair-pulling scuffle between two woman partygoers fighting over the same man, and one surprisingly well orchestrated car chase. The movie’s finest scenes are the ones in which Mitchell and Jackson bicker and banter: Mitchell’s timing is so marvelous, his charm so off-handed, that the movie seems to levitate when he’s around. But don’t underestimate Jackson’s hair, a smooth, sky-high pompadour that looks absurd until you realize how wholly Jackson owns it. This is hair with conviction; not just any actor could pull it off. And Jackson looks fantastic in his wardrobe of narrow trousers (including one dashing pair in red plaid) and a rotating selection of perfectly fitting military-style coats (the best of them features one perfect marijuana motif embroidered on the back of each arm). You can’t have a Superfly who’s not fly.

It’s admittedly somewhat misleading to compare the 1972 Super Fly with its 21st-century counterpart: The two movies don’t serve different audiences, they serve different worlds. Super Fly was a low-budget exploitation film aimed at—though not exclusively enjoyed by—an underserved black audience. What gives it lasting power is its livewire undercurrent of desperation. The new version is a slick, big-studio picture, emerging into a world where racial inequality has perhaps shifted forms, but has in no way eased. You can’t help but wish this Superfly-lite were coming into a better, smarter world than the one we used to live in circa 1972. We might enjoy it more if we weren’t stuck in such a place of uncertainty and anxiety. Priest’s coif, in all its outlandish glory, is the right hair at the wrong time. 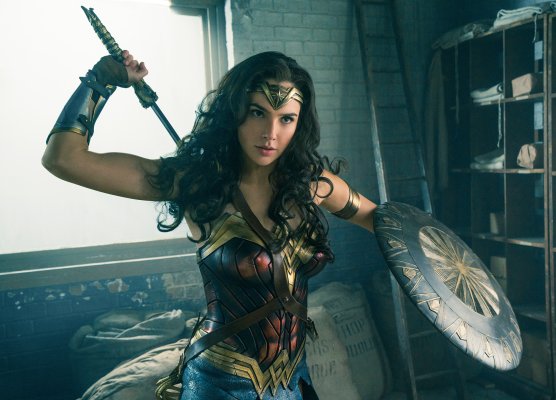 Fans Are Surprised by the First Shots of Wonder Woman 1984
Next Up: Editor's Pick