This week, Queen Elizabeth, 92, and Meghan Markle, the new Duchess of Sussex, will travel to Widnes, in Cheshire, in the north west of Britain, to unveil the new Gateway bridge across the River Mersey — known to millions thanks to the hit, “Ferry Cross the Mersey,” by Gerry and the Pacemakers. But Widnes, the birthplace of Britain’s chemical industry, is far removed from the affluence, ancient traditions and pomp of Buckingham Palace and Windsor Castle.

The Queen and new Duchess will visit the Catalyst Science Discovery Centre, a museum that tells the story of the region’s chemical industry.

I, too, have been coming to Widnes and the Catalyst Museum in recent years, to do research into the legal efforts to curb industrial pollution in the town in the 1870s. At that time, it was the center of the alkali industry, and was one of the dirtiest, smelliest and most dangerous places to work in England.

The Royals’ upcoming visit to Widnes supplies the opportunity to reflect on something that everyone shares: a relationship to specific local places, many with complex and hidden pasts, whose stories are kept alive by local history museums and their staffs, families, tourists and history enthusiasts.

The first chemical works were established in open farmland around Widnes in 1848, away from the growing cities of Liverpool and Manchester. Like modern-day alchemists, chemical industrialists transformed the rural landscape, their factories churning out base elements that were transformed into textile dyes, soap and glass: materials that seemingly defined the Victorian era.

The alkali trade made products that were used in soap, bleaching powder, glass, fertilizer, textiles, even cocoa and paper: materials that were exported to cities across Britain and the colonies and became powerfully associated with ideas of cleanliness, hygiene, morality, domestic comfort and education.

The London Times declared in 1898 that the alkali industry created the possibility of Victorian civilization, knowledge and material comfort, and stated that the industry was driven not just by machines but by “the desire for reading, washing and windows,” and, as such, were “a fair measure of the diffusion of the elements of civilization.”

Yet others saw a different side to the new chemical industry. The alkali process released sulphuric acid into the atmosphere, which devastated local crops and woodland. By 1891, about 500 acres of land in the region had been buried under an average depth of twelve feet of alkali waste.

And the chemical trade not only harmed the local air, water and land; it also injured people. When we think about the workers of the British industrial revolution, we often remember the workers of textile mills. Yet increasingly chemical workers, too, were part of this wider labor force.

Chemical workers — many of them poorly paid immigrants — were among the most poorly paid factory workers of the nineteenth century. They, too, faced harsh working conditions. In 1896, the journalist and friend of Oscar Wilde, Robert H. Sherhard, revealed to the nation the working conditions in Widnes in his magazine article (later book), titled White Slaves of England. “A mere walk through the yard is dangerous — tanks leak and corrosive fluids drop and drop. One man fell into a vitriol tank and was slowly eaten to death.” Workers wore paper because the acid fumes corroded their clothes. Acid fumes from the chemical processes rotted their teeth, making it hard for them to eat anything but bread without crusts. Many were choked by chlorine gas; men stuffed their mouths with flannel rags (called “muzzles”) to keep out the poisonous fumes.

Most of the alkali factories in Britain closed by the 1920s, after struggling for years with competition from industrialists in Germany and the United States (where some of the same people who founded the British chemical industry in the area of Widnes established chemical factories in Virginia and Alabama). Today, the region still remains a heavy chemical producer.

On June 14, 2018, news media and press photographers will descend on tiny Widnes as the Queen and Duchess are scheduled to visit Spike Island in Widnes on the grounds of the Catalyst Science Centre to open the (controversial, because tolled) new Mersey Bridge. This will be the eighth visit by a Royal family member to Widnes, and the third by Queen Elizabeth II. Visits like these, outside of London, are part of the Palace’s sophisticated public outreach campaign, in which members of the Royal household are dispatched to distant parts of the realm to put a spotlight on local events and achievements, and to empathize with local people on various matters of concern. For medieval castles and country house life as popularized in Downton Abbey offer only one face of Britain.

The Catalyst Museum’s Senior Curator, Paul Meara, grew up in Widnes and remembers the Queen’s first visit to the town, exactly 50 years ago, in 1968. The visit was announced to coincide with “Operation Spring Clean,” a program that promoted remediation of toxic waste that chemical industries left behind and encouraged local people to pick up trash. As the town newspaper explained in its reporting of the event, Her Majesty’s visit was part of her “personal look at just what had been achieved to reverse the grim aspect associated with the north west.”

Mr. Meira recalled the excitement of waiting for the Her Majesty to arrive on the streets of Widnes in 1968, but also adds that, “To be fair, the moon landings in 1969 and the move to decimal currency in 1971 made a much more lasting impression at primary school.”

Though more inconspicuous to tourists, small industrial towns and cities such as Widnes provide a rich tapestry of history for locals and visitors alike. Last week, historian Robert Weible, the past president of the Council on Public History and and former Chief Curator of the Lowell Museum, shared his insights on HNN about American industrial heritage and the founding of Lowell Museum 40 years ago, noting that in telling the story of New England textile mills and their workers with a wider public, Lowellians “decided to make their own history … by capitalizing on the power of their heritage.”

All of our communities have an opportunity to literally make history, by remembering and reflecting on the legacies of our place’s complex layers and heritage.

The upcoming Royal visit to Widnes will capture public attention and world media interest. But it also offers a rare opportunity to reflect momentarily on a place with a significant part in the history of the world’s second industrial revolution; on the determined people who made their lives there; and on the complexity of environmental systems and stories that are embedded in the landscape — long after their physical traces have mostly disappeared.

Jennifer Tucker is a professor of environmental history and photography in modern British society and culture, the author of Nature Exposed: Photography as Eyewitness in Victorian Science(2006) and series editor of Photography/History: History/Photography at Bloomsbury Academic Press in London. She is Associate Professor of History at Wesleyan University and Image Editor of the History and Technology journal. She is doing research in northwest Britain for a new book about the role of photographic evidence in 19th century environmental law. 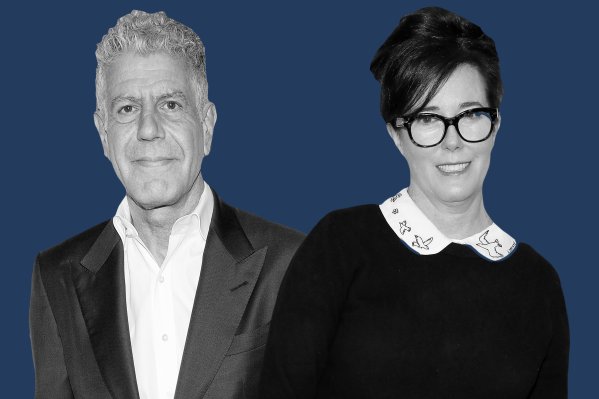 Anthony Bourdain, Kate Spade and the Dangers of Envying 'Perfect' Lives
Next Up: Editor's Pick