President Trump Says He Can Pardon Himself. Most Voters Disagree

President Donald Trump has asserted that he has the “absolute right” to pardon himself if charged with a crime, but a new poll shows the large majority of registered voters do not agree.

In a recent survey from Morning Consult and Politico, 58% of registered voters said they do not believe the president has the power to pardon himself, while only 21% agree with Trump on the issue.

The poll was conducted June 7-10, several days after the New York Times published a memo from Trump’s lawyers asserting the power of the president to pardon himself and Trump tweeted that “numerous legal scholars” have stated that he has the absolute right to do so.

A 1974 memo written by the Office of Legal Counsel under President Nixon stated that the president cannot self-pardon based on the longstanding legal principle that no person can be their own judge, although the Supreme Court has never ruled on the issue. Trump lawyer Rudy Giuliani said recently that Trump would not pardon himself because it would lead to impeachment by the House of Representatives.

The sentiment against self-pardons was even stronger among some groups, with 76% of Democrats and 61% of independents saying it is not legally permissible. Republicans, however, were split, with 36% saying it was not permissible and 33% saying it is.

The survey of 1,994 registered voters nationwide had a margin of error of plus or minus two percentage points. 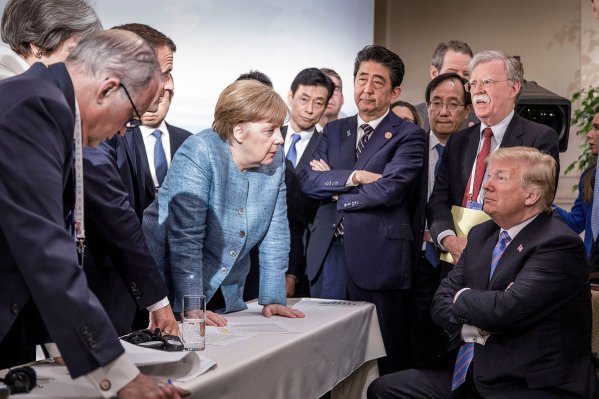 A Single Photo Captured President Trump's Approach to the G7 Summit
Next Up: Editor's Pick