Two female students from Texas A&M are criticizing the University over its handling of sexual misconduct allegations against two student athletes.

The women, Hannah Shaw and Meghan Romere, said they felt betrayed by the University after the men — both student athletes who they allege sexual assaulted them — were only temporarily suspended.

Shaw’s dissatisfaction went viral last week after she tweeted a response from the University’s senior associate athletics director, which Shaw said received after complaining that the student who had raped her was allowed to re-join the school’s swimming and diving team after his semester-long suspension was lifted. (He had been found guilty following an investigation by the school’s title IX board.) In an interview with NBC’s Morgan Radford, she said she thought the punishment would have been more severe. “I thought it would have turned out differently,” she said.

Romere shared a lengthy social media post four days after Shaw’s about her own experience at the University. She alleges that a football player who she was tutoring had begun masturbating in front of her in October of 2016. The University told her they believed her, she said, but they were unable to find him guilty because he claimed he had a “jock itch” and couldn’t control his scratching. She and another student who had a similar experience appealed, and won the right to a new hearing, but subsequently found out that the charges had been downgraded from sexual exploitation to sexual harassment — which didn’t include indecent exposure. The athlete’s suspension from the team was lifted, and they were required to sign documents barring them from being in the same room as him.

“I’m not proud to be an aggie anymore,” Romere told Radford on Wednesday. “I was more hurt by the way A&M treated me.”

Texas A&M said in a statement that it could not comment on specific cases, but students are sanctioned — punishments that can include suspension — if they are found responsible for sexual misconduct, and that student athletes are no exception.

“We have a deep commitment to a safe, secure environment for all students; to a fair investigative process; to rights of appeals by parties; and to rendering sanctions to those found responsible for sexual misconduct,” The University said in its statement.

Romere and Shaw said they will continue fighting. “They’ve messed with the wrong girls,” said Romere. “I’m not letting it go.” 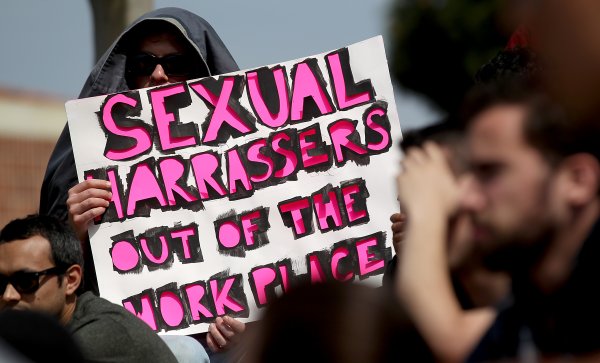 Report Calls for Change to Combat Sexual Harassment in Academia
Next Up: Editor's Pick